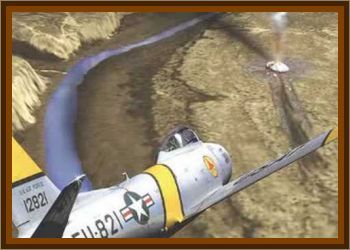 Two U.S. fighter planes were scrambled and ordered to shoot down an unidentified flying object over Norwich, England during the Cold War, according to secret files made public.

One pilot said he was seconds away from firing 24 rockets at the object, which moved erratically and gave a radar reading like a flying aircraft carrier.

To be quite candid I almost shit my pants! Saying he asked for confirmation, which he received. The pilot related.

The pilot, Milton Torres, 77 at time of interview, and living in Miami, said it spent periods motionless in the sky before reaching estimated speeds of more than 7,600 mph.

After the alert, a shadowy figure told Torres he must never talk about the incident and he duly kept silent for more than 30 years. His story was among dozens of UFO sightings in defense ministry files released at the National Archives in London.

In a written account, Torres described how he scrambled his F-86 D Sabre jet in calm weather from the Royal Air Force base at Manston, Kent in May 1957.

I was only a lieutenant and very much aware of the gravity of the situation. I felt very much like a one legged man in an ass kicking contest, The order came to fire a salvo of rockets at the craft. The authentication was valid and I selected 24 rockets. I had a lock on that had the proportions of a flying aircraft carrier, The larger the airplane, the easier the lock on. This blip almost locked itself. As it was coming in, it decided to take off and leave me behind, the next thing I know it was gone, It was some kind of space alien craft. It was so fast, it was so incredible, it was absolutely death defying. I returned to base and was debriefed the next day by an unnamed man who looked like a well dressed IBM salesman. He threatened me with a national security breach if I breathed a word about it to anyone.

The documents contain no official explanation for the incident, which came at a time of heightened tension between the West and the Soviet Union. Planes were on constant stand by at British bases for a possible Soviet attack. The files blame other UFO sightings on weather balloons, clouds or normal aircraft. Torres said he had been waiting 50 years for an explanation.

I shall never forget it, On that night I was ordered to open fire even before I had taken off. That had never happened before, he told the Times.

UFO expert David Clarke said the sighting may have been part of a secret U.S. project to create phantom aircraft on radar screens to test Soviet air defenses.

Perhaps what this pilot had seen was some kind of experiment in electronic warfare or maybe it was a UFO, Something very unusual happened.