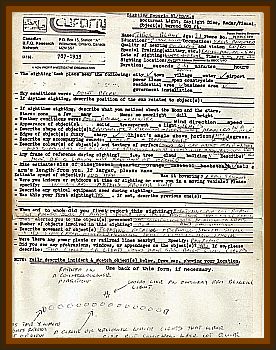 I was a car salesman at the time. I started driving towards the city of Toronto, Canada, on the QEW, Queen Elizabeth Way, eastbound to meet some friends at a bar on the Esplanade, a street lined with nightclubs. I didn’t have anything to drink and didn’t smoke any pot on that day/evening.

As I was driving, I noticed a string of lights slowly rotating counter clockwise over the city of Toronto, at about the ten o’clock position from my point of view. This caught my eye because these formation of lights were very unusual. The lights were evidently in a circular pattern with about ⅔ visible as the other third rotated out of view. Imagine a pie plate with about 25 lights around the circumference of it. As this pie plate would revolve, a third of these lights would be hidden from view as if they were obstructed by a solid body.

It was at night so all I could see was these rotating string of lights but they were definitely on a fixed platform as the lights were revolving in unison.

Although I’ve heard of UFOs and was curious, at that time in my life, I didn’t really give that much thought about them.

I’ve always been interested in nature and especially about the universe. I’ve seen all kinds of aircraft and advertising blimps at night before. I drove taxi’s off and on for 15 years on the night shift and have seen countless meteors, lightening, satellites. On 2 occasions I’ve even seen extremely bright, slow falling, green fireball meteors lighting up the ground, for a couple of seconds, as if it was daylight. I’ve read, in later years, were other witnesses reported green fireballs as UFO’s.

I chuckled to myself thinking how easily UFO believers can be fooled by natural phenomenon.

Anyway, these circle of lights were slowly descending and approaching towards me, westbound, while I was driving about 70 mph on the highway eastbound. These lights were getting closer and closer as we approached each other. I recall thinking to myself that this must be some kind of advertising balloon and those lights were letters. As I kept driving, I was paying more and more attention to this object because the closer it was getting, the more unusual it looked.

I kept glancing at it, while driving, waiting until it was close enough to read what these letters were saying, still thinking it was some kind of advertising blimp. The closer it got, the more I looked at it. Now at my nine o’clock position, the string of rotating lights started to bank left like an airplane would turning right. At this point, I realized that these lights were not letters at all. They were different shaped, yellowish white lights.

The reason these lights were different in shape was because they were ingrained into some body. When the lights were seen head on, they were circular. But as they rotated out of direct view, they changed shape like the different crescents of the moon.

That’s why they appeared to be all different shapes. Anyway, during the time when this object started to bank left, from my point of view, I was struggling with myself trying to understand whether this was a plane or a balloon. It was flying too slow for a plane, yet, too fast for a blimp. Also, it didn’t appear to be flying or floating. The best way I can describe it’s motion is that it looked like it was sailing in the sky.

What’s interesting here is that the human brain tries to associate what the eyes are seeing, to something already seen or experienced before. That’s why I was at war with myself trying to decide whether this object was a plane, blimp or a balloon.

Every time I resigned myself to what I must be witnessing, I jumped to another conclusion. This jumping from one conclusion to another occurred during the whole experience. I was imagining all kinds of things.

For example, if it was a plane, the only way these lights could have been positioned was in a circle because this plane must have had some kind of supporting structure in a circle from wing tip to wing tip. This didn’t make any sense at all. I’ve seen advertising planes before. This was nothing like this. Not even close. Then I was trying to imagine a Goodyear blimp with these letters going across it’s side. This was nothing like it either. So here I was, trying to drive and watch this object at the same time.

As I was driving, I started to slow down because I kept looking at this circle of lights more than the road ahead of me. In retrospect, I don’t even know how I kept my car on the road because I was so awed by this display in the sky.

As the object kept banking and banking more and more, it eventually ended up totally perpendicular to the ground! The first thing that came to mind was a big Ferris wheel rotating in the sky. At this point I slowed down to about 30 mph in a 60 mph highway for my American friends, and put my four way, flashing hazard lights on my car fearing that another car would smash into the back of me for going so slow on a high speed highway.

As I was mesmerized by this UFO, a surge of adrenaline hit me like a ton of bricks. I didn’t realize how big this thing was. At first I thought it was the size of an airplane fairly close. It was gigantic. At least twice the size of a football field, bigger than an aircraft carrier. I don’t know what gave away it’s size. Maybe the reflections of light on the ground. The best way I can relate this sudden realization is like one of those illusions most of us have seen. You know, when you look at a pixel drawing with an image you can’t see until you stare at it for a while? After a period of time, you make out the face of a women or something like that?

That’s kind of the transformation I experienced. At first I thought the object was the size of a large plane than suddenly I really saw it. It was huge. I yelled out loud to myself, holey crap, it’s huge. I don’t freaking believe it, It’s freaking huge.

I thought it was fairly close at first, than bang, it was much farther away and larger than my brain first comprehended it. Speaking about this surge of adrenaline. Have you ever had a really close call having a car accident? When your heart rate skyrockets to about 180 beats per minute? That’s what I felt when I realized how gargantuan this object was. I could literally feel my heart pounding like crazy. To be frank, it literally scared the hell out of me, when I realized how big it was.

After, I don’t know how long, probably only a few seconds of rotating in this perpendicular position, this thing started to climb and right itself and sail” back to the direction it originally came from. I rolled up my window, turned off my hazard lights, and started to speed up to chase it. Still it seemed other motorists didn’t notice this object. It still irks me to this day.

As I was approaching the city limits, this object was in it’s flat position again climbing over the city. Then, the rotating lights turned off except for a red aircraft like blinking light, which I never noticed before. After a few seconds, the rotating lights turned on again. It was like in the movie Close Encounters Of The Third Kind. The lights just blasted on. Then after a few seconds they turned off again as it seemed to be right over the city. Strange behavior.

Now I was exiting off of the highway onto Spadina Rd. I lost track of these lights because of the tall buildings. When I was on the street where I was going, I saw a cop parked on the other side of the road writing a parking ticket.

I stopped in the middle of the road and ran over to him. He was quite taken aback by my seemingly aggressive approach.

How long have you been here?

I forgot what he said, but I asked:

Did you see that big circle of lights flying in the sky?

After parking my car, I met my friends at the bar, Baily’s, and told them what happened but they didn’t take me seriously as they’ve already had a few and were more interested in the ladies. After sitting at the bar by myself for a couple of hours I went home. I was living at my parent’s house at the time, temporarily, so when I got home around 1:00 a.m., I called the police. I didn’t know who else to phone at the time.

They didn’t take me seriously of course so after that, I phoned the Toronto International Airport and managed to get through to Air Traffic Control and asked them if they had anyone call in with a UFO report. Nothing. So I called the police again and convinced them to take me seriously as I wanted to make a report. They told me they can send a couple of officers to my house. As it was late and my parents were asleep, I told them I’d rather come to the station the next day to report.

Next morning, when I contemplated going in I decided not to, fearing they would think I’m some kind of wacko. As the days went by, scanning the newspapers looking for a UFO sighting to no avail, I started doubting myself. I was trying to convince myself that perhaps I was somehow mistaken. Maybe it was something not out of the ordinary at all. Maybe it was a balloon or airplane of some kind. Maybe like thousands of others, I witnessed something that I misinterpreted for something else.

About a week or so later, on or about the 10th page of the Toronto Star, bottom right hand corner, there it was, a short article.

Dozens of Mississauga residents reported a UFO as big as a football field. I don’t recall the whole article. I’ll never doubt myself again no matter how much ridicule I’ll be subjected to. After about 27 years, I just had to let this out.