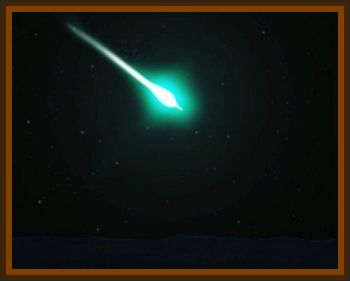 On the Colorado River near Topock, AZ a long time houseboat resident was stunned to see a large, bright fiery object hurtling from the sky toward him.

From the upper deck on his houseboat, R.B. was puzzled by the vivid turquoise blue with touches of green he was seeing instead of reds/yellows and oranges in more normal fire.

Despite the strange blue/green color, the witness thought perhaps he was watching a plane about to crash.

Frank had gotten up to let his Siamese cat out and went outside to look at the clear night sky. His home is about 3 miles east of the Colorado River. To his surprise a large, bright object of many colors dominated by turquoise blue with some green was streaking through the sky toward the Colorado River area.

Frank could also see some red and yellow colors like flames and expected to hear the huge boom of a crash impact.

But over on the Colorado River, R.B. was only about 400 yards from where the fiery turquoise blue object hit the ground on the west side of the river. He was outside fishing at 3:00 a.m. when he saw the brilliant turquoise blue flaming object.

When it hit the ground about 100 yards west of the river he saw the whole thing bounce back up in the air with even more glowing red/yellow pieces around the big center object. And yet, he did not hear the crash sound he expected.

There was only a thump sound, he told the source. But he was afraid that some kind of plane had crashed and urgently went down to the lower deck of his houseboat to get his cell phone and climbed back up to the top deck to get a satellite signal for his phone. When he had a signal he kept dialing 911, but only got a busy signal. All of this took about 7 minutes after the crash.

Then to his complete amazement the witness heard the loud sound of a helicopter or skycrane helicopter coming fast in the night sky. The next thing he knew the still glowing object was hooked underneath the skycrane and carried away rapidly. He thought that the object as big as a 10,000 gallon tank truck and oval shaped.

After the Sun came up, David Hayes the owner and general manager of KTOX AM 1340 was driving to work along I-40 in Needles when he saw very unusual vehicles traveling together with black and white U.S. government license plates.