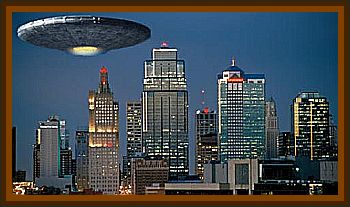 This witness, who wished to remain anonymous, had recently undergone hypnotic regression due to a chilling encounter in the early hours one morning at her home. The session would reveal events both remarkable and terrifying.

And, like many other cases, certain details stray into other fields of interest, including what would appear to be an out of body experience that would result in a bizarre split in the witness's perception.

Whether MUFON, or any other UFO or paranormal investigator follows up the incident remains to be seen. It is, however, perhaps the location as much as the incident itself that it is of equal intrigue here. Kansas is one of several states in America that sits along the 37th parallel. We have looked at some of these incidents before. And it would seem that this most recent encounter is another that may have a connection to this mysterious tunnel of paranormal activity.

Both the witness and her husband were awoken by the sound of their dogs scratching and whining at the bedroom door. This was strange in itself as they were placed in their outdoor pen each night before the couple went to bed.

The couple got up, and after having had to unlock the locked back door, took the dogs back outside.

Confused at the situation, the couple nevertheless returned to their bed just after 3:00 a.m. and shut their door. Only minutes later, the door opened. And as the married couple looked on in disbelief, two strange little creatures entered the room, appearing to float instead of walk.

She would describe how a feeling of paralysis came over her the instant she saw these entities. She was also aware of how the air around seemed to thicken and her perspective appeared to go into slow motion.

She noticed that one of the creatures remained in the doorway as if guarding the entrance to the room. The other continued forward towards the now petrified couple.

As she watched this entity approach, she noticed how it seemed to vibrate slightly. It appeared to go in and out of focus. Its face was completely white, with large eyes and protruding brows that gave it an unsettling appearance. Its neck was much too thin for its head, as was its body, which donned a silver grey suit. She also sensed an energy to the creature. An energy that she didn't understand, but that filled her with dread.

She would also speak of the sensation of seeing events from her usual first person perspective, while at the same time seeing the same events unfold from above as she stared down at herself and her husband laying on the bed.

Whether this temporary splitting of perspectives was induced by these strange visitors or was a reaction to the extreme stress of the situation is perhaps up for debate. It is, a strange detail offered by other victims of abduction or close extraterrestrial contact.

As she looked down she began to feel a discomfort, as if the energy from these visitors were attacking her astral form. She felt herself move outside of the bedroom, and through the roof of the house. She was looking down at their house when she also noticed an intense, bright light. It looked round and shined like a full moon but had a distinct artificial quality to it.

Then she felt herself being pulled back into the bedroom and into her physical body on the bed. She sat bolt upright, now fully awake. The beings were gone, but the bedroom door was wide open. She shook her husband and asked if he could remember what had happened. He was groggier than usual and although admitted that he was off, he had no memory of the events described by his wife.

Then, she looked at the clock. Although the incident had lasted only minutes at the most, it now read 4:14 a.m. There was over an hour of time that she couldn't account for.

Knowing her experience was real, the witness would seek hypnotic regression soon afterward. She was determined to find out what happened after she had left the house and witnessed the strange bright light below her.

After noticing the light, she had suddenly found herself in a very white room. She was slightly above a metal table in the room. Several different creatures were in the enclosure also. All adorned silver/white clothing and she could see several of the large headed entities that had entered her bedroom.

A loud rumble was audible around her and a warm golden light washed over her body. She believed it was some kind of scanning device. Then several of the entities carried her through a strange tunnel. An entity would guide her to a section at the end of this tunnel. She then entered something like water or a liquid gel. She could feel an intense pulsing, like electricity. Each time it pulsed she felt a crushing sensation run through her as if waves of energy were washing over her. Before she had time to think about her situation, she was pulled out of the device and found herself again moving along a tunnel.

She noticed there were other people in similar containers all around her. She could see a bright light ahead and four creatures, similar to the others, but with blue faces. They appeared to be looking down at her. Her perception began to cloud and her memory became increasingly fuzzy.

The next thing she realized, she was back in her bedroom, sitting upright in her bed. Her husband was asleep beside her. More importantly, the strange entities were no longer in the room.

Although the hypnosis session wouldn't reveal any further details, the witness would remember partial memories over the following months. While she couldn't locate any signs of physical injury, she had the persistent feeling that something bad had taken place.

She also had a revelation while undergoing a session in a sensory deprivation chamber. The sensation of weightlessness brought back memories of being in the strange tunnels. While she, believed these tunnels to have been a part of the beings craft, she now had a notion that they were wormholes in the universe.

The state of Kansas has experienced several UFO waves, and that entire region consistently remains high in overall UFO sightings each year. Even more intriguing, Kansas is one of the states that sits upon the 37th parallel. This line of latitude is believed by some researchers to be a paranormal highway, along which all manner of strange incidents take place. And these range from apparitions, sightings of Bigfoot creatures, and, of course, UFO and alien encounters. It is along this line of latitude that such controversial facilities as Area 51 and the alleged underground base at Dulce reside.

There have also been several cases of crashed UFOs along the 37th parallel. This perhaps indicates some kind of magnetic anomaly, which some researchers claim interferes with anti-gravity technology on these other worldly crafts. Perhaps these magnetic anomalies also contribute to the strange behavior along this particular line of latitude.