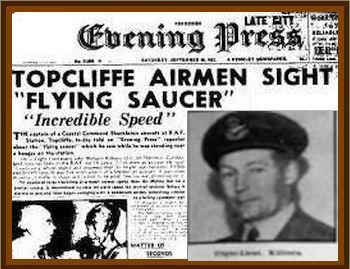 A British Meteor aircraft encountered a UFO near Topcliffe, Yorkshire, England. A silver disk object was following it as it made its approach to land. The object appeared to be hovering whilst rotating on its axis, and was observed by personnel on the ground.

When the jet began circling, the UFO stopped and suddenly took off at high speed.

The following day six British pilots flying in formation over the North Sea observed a shining spherical object approaching from the direction of the fleet. The UFO eluded attempts to intercept and disappeared. As the squadron returned to base, one of the pilots noticed the UFO following behind him. He turned around, but was unable to catch it as the UFO also turned and sped away.