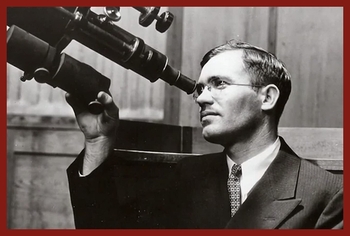 Tombaugh was probably the preeminent astronomer to have reported seeing UFOs. He saw several UFOs near Las Cruces, New Mexico. He described them as six to eight rectangular lights, stating:

I doubt that the phenomenon was any terrestrial reflection, because... nothing of the kind has ever appeared before or since... I was so unprepared for such a strange sight that I was really petrified with astonishment.

Tombaugh was also later to report having seen three of the mysterious Green Fireballs, which suddenly appeared over New Mexico in late 1948 and continued at least through the early 1950s. In 1956 Tombaugh had the following to say about his various sightings:

I have seen three objects in the last seven years which defied any explanation of known phenomenon, such as Venus, atmospheric optic, meteors or planes. I am a professional, highly skilled, professional astronomer. In addition I have seen three green fireballs which were unusual in behavior from normal green fireballs...I think that several reputable scientists are being unscientific in refusing to entertain the possibility of extraterrestrial origin and nature.

In 1949, Tombaugh had also told the Naval missile director at White Sands Missile Range, Commander Robert McLaughlin, that he had seen a bright flash on Mars in August 1941, which he now attributed to an atomic blast. Tombaugh also noted that the first atomic bomb tested in New Mexico would have lit up the dark side of the Earth like a neon sign and that Mars was coincidentally quite close at the time, the implication apparently being that the atomic test would have been visible from Mars.

In June 1952, Dr. J. Allen Hynek, an astronomer acting as a scientific consultant to the Air Force's Project Blue Book UFO study, secretly conducted a survey of fellow astronomers on UFO sightings and attitudes while attending an astronomy convention. Tombaugh and four other astronomers told Hynek about their sightings, including Dr. Lincoln La Paz of the University of New Mexico. Tombaugh also told Hynek that his telescopes were at the Air Force's disposal for taking photos of UFOs, if he was properly alerted.