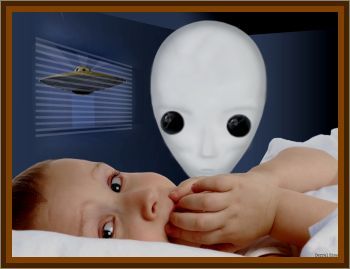 Mysterious events surrounded Tracey Jones, and were more like paranormal activity as opposed to alien abduction or intervention. She would regularly find household items moved about, or even having vanished completely, only to turn up again completely out of the blue.

One odd incident happened following major surgery that Tracey had undergone. A large, flat bandage masked the incision on her chest. One morning, she went to remove the bandage only to find it was gone, and the wound had completely healed over and only a very small scar remained.

Under hypnotic regression, Tracey described being abducted since she was young, each time she was subjected to medical tests and examinations, including the removal of eggs through a long silver tube. What’s more, she claimed during these sessions that her children have also been abducted on regular occasions since their birth.

When the family moved to Dubai for Darren’s job, the paranormal activity continued to happen, as it did when they moved back to the United Kingdom several months later.

On one occasion, Darren woke to see a figure near the bedroom window. It was about the same size and shape as Tracey, and appeared to be looking in the box where the bandages and tape was kept. Drowsily, Darren assumed that it was Tracey, perhaps getting herself some painkillers. It was only when he turned to go back to sleep that he discovered Tracey was sound asleep next to him.

Instantly awake, he sat up and looked towards the window: there was nobody there.Their brief stay in the house was plagued with other strange happenings:

Doors opening and closing on their own, ornaments and small items of furniture being moved about, voices being heard from empty rooms.

They assumed the house was haunted, there was some evidence from neighbors that other residents living there previously had had problems. But, as discovered before, it is the family, not the place, which attracts the attention of the uninvited visitors. When the Jones family moved, to another old property, they experienced more inexplicable events. Electrical appliances went haywire, toilets flushed when there was nobody near them, baths were filled and emptied, and Tracey once heard footsteps progressing down the hall and right past her, although she could see nobody.

They contacted a local clergyman, who came and blessed every room in the house, telling them that he sensed a malign presence in the smallest of the three bedrooms. They, too, were worried about this room: it smelled constantly of lavender, it was cold even when the heating was on, and the portable TV they kept in there would switch itself on and off.Throughout this time, Darren was waiting to land an overseas contract, so the family continued to rent temporary accommodation.

For eighteen months they lived in a modern house, and were relatively free of problems. Then they moved to a large, three bedroomed semi detached house on the edge of the Yorkshire moors, with spectacular views from the rear of the house across the hillside. Night after night, they watched the swooping and sweeping of bright lights across the hills, the same UFOs that so many people have seen in this beautiful part of the country. They even captured one of the most spectacular aerial displays on video. the UFO remained stationary for over twenty minutes, turning on its horizontal axis every 30 seconds, so that Darren and Tracey could see the circular dark underside. They phoned Manchester Airport and UFO Hotlines. The airport put them in touch with an RAF base, and they were promised that somebody would visit them to collect the video.

Mysteriously, within 24 hours their house was burgled and the tape taken, along with a computer and printer. Other valuables,including cash, were left untouched.One morning, Darren went into the bathroom for a shower. Tracey followed him within a second or two, because she needed water for her baby's bottle warmer. To her astonishment, Darren was not there. Puzzled, she looked into the shower, it was wet and had obviously been used very recently. She checked all the rooms upstairs, calling his name, but there was no sign of him. From the window she could see that his car was still on the drive, so she ran downstairs and searched the rest of the house. As she went back up the stairs she saw Darren on the landing, a towel around his waist, dabbing at a nick in his chin from shaving. He was bewildered when Tracey told him what had happened: he was adamant that she had never walked into the bathroom, and that he had been there all the time. Shortly after this, Darren began to lose time. A 5 minute journey to the local garage would take half an hour, with no memory to account for the missing time. Marcus, their second child, who was 2, began to have terrifying nightmares, described by the health visitor as nightterrors. Tracey would wake in the night feeling paralysed, unable to move anything except her eyes. On more than one occasion she saw two tall, thin old men with long white beards and wearing black habits, like a monk's, at the foot of the bed, looking at her. All the family, with the exception of the baby, Daniel, would find strange marks and bruises on their bodies, and one morning Marcus clearly had the imprint of four fingers on both sides of his torso.

Like many people, Tracey has a list of fears and phobias, some of which she cannot explain. For example, she fears that in the dark someone or something will reach out and touch her. She hates being alone, and always insists on having curtains closed, to keep out the faces. She said that since she was 4 years old she has felt she is being watched at all times, and recently this feeling has become stronger.In July of 1997, Darren, who worked for a shipping company, was posted to Dubai, and seven weeks later the family flew out to join him. While he had been living on his own, nothing strange had happened. But as soon as Tracey and the children arrived, life began to go haywire again. Marcus, now 3 was repeatedly telling his parents about a man who lived in one of the lights in his bedroom, and who took him and his sister Georgina up into the light to talk and play. His parents were particularly worried because Marcus seemed to believe he could fly, and wanted to climb on to the villa roof. He knew, although his parents have no idea how, that there was a water tank up there. The man told Marcus to repeat the letters E,R and S. Darren nor Tracey have any idea of the meaning of this. Georgina, who shared a bedroom with Marcus, woke in the early hours of one morning to see the light flickering violently in the hallway, and a strange fluorescent oval shaped light on the wall at the foot of her bed. In the center of the light was a thin grey figure with very long arms. It seemed to be moving towards her. The family's dog, Bibi, a cocker spaniel, began to whimper. Georgina glanced at Marcus, and noted that he was still soundly asleep. She remembered nothing more until the next morning, when she showed her parents marks on both her knees, which again looked like fingerprints from four fingers. When Georgina sketched the figure she saw, Tracey did several other small sketches of faces and showed them to Marcus, who unhesitatingly selected Georgina's as the man from the light.He insisted that when he went into the light Georgina was the only person with him, apart from the man.

As the weeks in Dubai went by, Marcus became increasingly nervous and difficult. He complained that the man hurt his tummy, and eventually Tracey moved a mattress on to the floor next to her bed for him to sleep on.

There was a succession of strange events, with electrical equipment behaving wildly, and on one occasion a mug moved across the kitchen table and smashed down on to the floor. Tracey and Georgina together lost over half an hour of time. Because of problems with Darren's contract in Dubai, the family eventually moved back to Britain in December 1997, and rented a house in Huddersfield. Tracey kept a diary of events as they happened. She kept this up after they returned, and her regular entries show that strange things were happening to the family on an almost daily basis. Although they were in different surroundings, Marcus still insisted that his night visitor, the man, lived in the light, and took him up there. He was still so badly disturbed at night that Tracey arranged an appointment with a psychologist, who told them he was suffering from nightmares. Worryingly, Daniel also began to scream in the night, and marks were found on his body. Darren, Tracey and Georgina all heard, clearly, each other's voices when there was nobody around. Georgina, who is always referred to as Jo in the family, and Darren both heard Tracey speaking to them when she wasn't there, Georgina was particularly baffled because her mother called her by her full name, instead of Jo. For Tracey, the most moving moment was when she woke to hear the voice of a young boy, aged about 8-10, as if he was on the pillow next to her. He was showing something to somebody, saying in amazement: Isn't this interesting? For Tracey it unleashed memories: years before, she had lost a baby, a boy, who would have been nine had he lived. She carried him for the full nine months of pregnancy, but he was stillborn.

Again, the Jones household was plagued by mysterious bangs and other noises. Small items would go missing and then reappear, other objects would turn up unexpectedly in strange places: for instance, Georgina found a hammer on top of a pile of games she had just tidied up. The hammer had not been there a few minutes earlier. Darren, having fallen asleep downstairs on the settee, woke to find himself on the floor and the heat turned on, although he had no memory of moving or putting the heat on. Significantly Tracey woke one morning to find her right nostril bleeding slightly, and hurting.

At times,Tracey felt she was going mad. Because she was pregnant with her fourth child, she was not yet ready to be hypnotised. A few months after the birth of her son, Branden, we met at Joyce's home and Tracey was put under hypnosis. She told of waking in the middle of the night to see two very tall men at the foot of her bed, both wearing monk like habits and both with piercing blue eyes and white beards. Not knowing how she had got there, she then found herself lying on a white table in a room with rounded ends, it was not completely circular but was curved at the corners. She was unable to move, but could feel no physical restraints. There was a powerful white light shining down on her, and her chest was exposed. She saw what she described as a mechanical object coming down from above, with a long silver colored needle at the end, and a line of red lights flashing up and down the needle. The needle came down, as if automatically, and entered the open wound on her chest, and she felt a burning sensation. She recalled seeing shadowy figures moving about the room, but she was unable to look at them properly because she could not turn her head. This was enough for one session, but in future Tracey will be having more hypnotherapy to talk about other incidents.