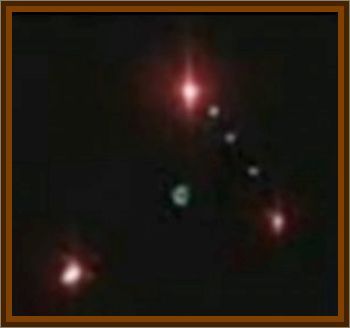 The Tinley Park Lights is a reference to a series of five mass UFO sightings which occurred on August 21, 2004, two months later on October 31, 2004, again on October 1 of 2005, and again on October 31, 2006, in Tinley Park and Oak Park, IL, suburbs of Chicago. Witnesses to each event reported seeing three silent, self luminescent objects which were red or red orange in color and spherical in shape, hanging in the night sky and moving slowly about in formation for a duration of approximately 30 minutes in each occurrence.

The objects in each event were at low to intermediate altitude, and were visible from the ground for approximately 12 miles in any direction.

Due to its duration and proximity to a populous area, as well as random timing, these mass sightings produced multiple photographs and videos of the event, as well as a large number of witnesses, making this a unique mass sighting. During the October 31 sightings, a vast number of residents were filling the sidewalks to trick or treat with their children, creating a large and cross sectional witness base. Residents reported entire blocks of trick or treaters and parents stopped in the street to observe the objects.

On the Saturday, August 21 occurrence, the conspicuous objects were in full view of gridlocked traffic making escape from Tinley Park's 28,000 seat First Midwest Bank Amphitheater, at that time called Tweeter Center, where Ozzfest had just ended, creating another grouping of observers. Some witnesses reported seeing conventional aircraft orbiting in the vicinity of the lights.

Opinion among witnesses differs in if the objects appeared to be attached to a very large, unlit black triangle object, or if the lights appeared to move independently of one another. Some witnesses maintain that the lights remained in a rigid triangular arrangement at all times, suggesting it may have been one enormous triangular object with lights at its corners, while others perceived independent movement.

On November 2nd, 2008, the show UFO Hunters on the History channel featured the events, and did an examination of the videos. They used GPS locations of the footage, relative angles, and movement of the lights to reveal their behavior. The determination was that the lights did move in unison to one another, most likely connected, and through relative perspective of the videos, estimated that the size of the object was close to 1,500' across.

Sightings were seen in many parts of the continent preceding the sighting in Tinley Park, including British Columbia, and parts across the northwest as well as Texas. Several days later, two sets of the three lights were again caught on film in Australia.

Due to the absence of required navigation lights and the objects' unconventional flight characteristics, it seems unlikely that these were conventional aircraft. One of the more initially compelling possibilities is that these may have been military illumination flares, incendiary light sources suspended from parachutes which are intended to illuminate ground targets, sometimes seen where military aircraft are conducting exercises. Illumination flares have been suggested to be the likely central culprit of the similar but much more widely publicized Phoenix Lights event of 1997. However, in this case, video and witness accounts do not seem to present a slow, wind borne descent normally associated with illumination flares, and video and photographs do seem to suggest persistent relative order between the objects over the course of the event, moving about in a way inconsistent with gravity bound objects retarded by parachutes.

The airspace over these dense suburbs are part of the immediate operating area of both nearby Midway International Airport and O'Hare International Airport, one of the busiest airports in the world, and is a controlled, Class Bravo airspace. In fact, Tinley Park is home to the O'Hare ATC backup radar system, an ASR-9 primary surveillance radar, Fac Ident QXM, which is also the active approach control radar for the Elgin TRACON facility. The controlled status of this busy commercial Class B airspace makes scheduled military exercises of any type unprecedented, unsafe, and unlikely, especially with respect to ground target illumination over a metropolitan area.

The multiple videos and photographs of the objects, along with supporting witness testimony as to the behavior of the objects suggests that this was not a misidentification of celestial bodies or other natural phenomena. Aerial suspension of lighted objects as a hoax could be considered a possibility, particularly with the event occurring on two consecutive auspicious dates popular with pranksters: Halloween. However, no known investigations by the FAA or other agencies were undertaken, nor any special public concern for safety expressed following the incidents, despite their potentially obstructive presence in a controlled commercial approach and departure corridor where lofting of obstacles would be taken very seriously and generally acted upon by law enforcement agencies. No unexpected or uncorrelated radar tracks were publicly reported by the FAA in the wake of the events.

The origin of the objects is still unknown at this time.

The events were covered on local television news, as well as in the Chicago Sun Times and again in Chicago Magazine in March 2007. On Sunday, May 18th, 2008, Dateline NBC aired the episode, 10 Close Encounters Caught on Tape, which featured the Tinley Park events, as the: Tinley Park Triangle, in their number 3 spot. On November 2, 2008, the History Channel program UFO Hunters featured the events.