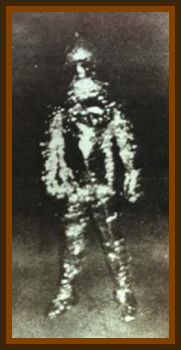 Aliens come in all shapes and sizes, from the little green men of Kelly, Kentucky to the 10' tall giants of Voronezh, Russia. There has always been discussion about the close encounters of the third kind aliens. Some of these seem to be living, breathing beings, and yet some appear to have characteristics of a robot. One theory readily accepted by investigators is that many of the UFO sightings are of scout ships, who take exploratory journeys to our planets surface, while a mother ship hovers some where out of sight. Many propose that these scout ships are occupied by a robotic, mechanical being. These would be expendable in carrying out experimentation on unwilling humans, and also on our flora and animal kingdom.

Many of the earlier stories of alien sightings are sensationalized, to say the least. But sticking to my own rule of evaluating each case on its own merits, one report which seems to have merit occurred in Falkville, Alabama on October 17, 1973. This case is unique in some respects, most notably the alien seems to have attributes of both of the above descriptions, a robot looking creature with the running gait of our most talented athletes.

This strange account began when police chief Jeff Greenhaw received a phone call from an excited lady who said that she had witnessed a spaceship land in an open field not far from the town proper. Greenhaw took off like a shot, taking along his trusty Polaroid camera. Dark had fallen several hours earlier, and the police chief was armed for anything. It would be about 10:00 p.m. when he made it to the location of the alleged landing.

After a cursory look around, he found no trace of a spaceship. As Greenhaw continued his search of the area, he was taken aback by the sight of an alien like creature standing just off the side of the road. The being appeared to be wrapped in aluminum foil as it began to walk toward Greenhaw.

It looked like its head and neck were kind of made together, it was real bright, something like rubbing mercury on nickel, but just as smooth as glass, different angles give different lighting. I don't believe it was aluminum foil. The aliens movements were very mechanical like. An antenna was attached to its head.

Though in shock, he managed to snap off 4 pictures of the odd looking alien. When he flicked on his headlights the alien was obviously frightened, as it began to make its escape.

Greenhaw immediately took off in his truck in pursuit, but because of the rough terrain of the field, he was only able to manage 35 MPH. The robotic movements of the alien were now in high gear, and it raced across the open field. Greenhaw could not keep up, and the being escaped into the night.

He was running faster than any human I ever saw, Greenhaw stated.