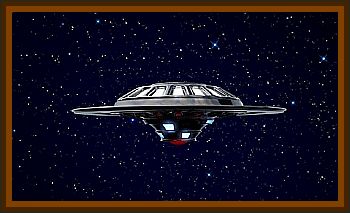 While in the army, within 5 kilometers of the town of Tindouf in the Algerian Sahara, with a comrade, he saw a light coming towards him. The two men were quite afraid because they had gone downtown without asking permissions from their chief and probably initially thought that they were being sought for.

They thus hid behind a sand hillock, while the light approached right in front of them within 15', the display appearing to them like some science fiction movie, imposing and beautiful.

For the witness, there was no doubt that it was a UFO, if only by its size of almost 10'. I was hovering 4' above ground level, with a light with front and another at the back, different from other lights, which seemed to go down and project on the place in a square beam or a square section.

It had also a light on the top and another below, both described as beautiful. The craft also had windows with dark lights, obscured or darker, and they did not hear any engine noise, only a sound compared to that of a simple ventilator.

The 2 men then fled, the witness looking back when he was at a distance of 100' from the UFO.

He then saw that the UFO was stopped in front of a fill, and that a meager thing came out of it, that he could not see well, but it had a small bump on the head. He then fled again running as fast as he could.

The witness specified that it was full moon and that the visibility was thus good. Neither him nor his friend had dared to tell their story, by fear to be perhaps considered crazy.