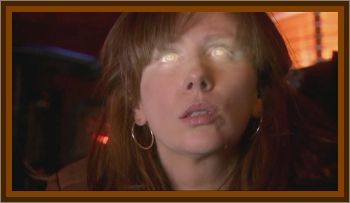 When my experience happened I had about a 3 hour missing time in which later, under hypnosis, I relived the most unusual night of my life. I did not go willingly to the craft. Two small aliens dragged me by my arms, on my back to the craft after they rendered me unconscious. The next thing I remember is waking up on a table inside some type of small craft. A guide greeted me and gave me something to drink. I now believe it was a stimulant of some kind because I was not sleepy after I drank the substance.

I was taken out of the craft and when I looked around I noticed I was standing on top of a hill. It was dark, but I saw a faint light near a cavern. We walked up to this area and it is then that I saw a man, dressed in a red military type jump suit, like a pilot would wear. My guide seemed to know this man as he greeted him as we came closer. I also noticed he wore some type of patch and was carrying an automatic weapon.

When we walked into the tunnel, I realized we were going right into the side of a large hill or mountain. There we were met with another guard in red and I then saw a computerized check point with 2 cameras on each side. To my left was a large groove where a small transit vehicle carried you further inside. To my right it looked like a long hallway where there were many offices. We took the transit car and went for what seemed to be a very long time to another secured area. It was then that I was told to step onto some type of scale like device that faced a computer screen. I saw lights flashing and numbers computing and then a card was issued with holes punched into it. I would later realize it was used as identification inside a computer.

I asked my guide where we were going and why. He didn't say too much the whole time except that he was to show me some things that I need to know for future reference. He told me that we had just entered Level One of the facility. I asked what kind of facility it was and he did not answer.

This story is so very long and detailed and I hope to write more about it so I will only highlight some of the things that I saw.

I was taken to a huge looking elevator that had no door. It was like a very large dumb waiter. It took us down to Level Two, where there were 2 guards in a different color jumpsuit and I had to go down a large hall and saw many offices that had computers that lined the wall. As we walked by, I noticed the lighting was strange in that I could not see a source for it. Other people walked by and never once acted like I was a stranger. I felt I was in a huge office building where there are many employees with many offices and cubicles.

I then saw an extremely large area which looked like a giant factory. There were small alien type craft parked at the sides. Some were being worked on underneath and it was then that I saw my first grey type alien. They seemed to be doing the menial jobs and never once did they look up as we passed. There were cameras posted everywhere.

We arrived at another elevator and went down to Level Five. It was then that I felt a sense of extreme fear and balked. My guide explained that as long as I was with him that I would not be harmed. So we got off and I saw guards posted there at the checkpoint. This time they were not friendly and were issuing orders right and left. I noticed that 2 of the guards seemed to be arguing about something and they kept looking over at me. I wanted to find the closest exit out of this place, but I knew I had come too far for that.

This time I was asked to change clothes. I was told to put on what looked to me like a hospital gown, only thank God there was a back to it! I did as I was told because I didn't want to cause any trouble. I stepped onto this scale like device and the screen lit up and I heard strange tones and frequencies that made my ears hurt. What I really thought was strange is that these guards saluted the guide I was with, although he was not wearing any military uniform. He was dressed in a dark green jumpsuit, but it had no insignia that I know of. He told me to follow him down this corridor.

As I passed the guard station, I noticed the humming of those cameras as they watched my every move. I was taken down another hall and it was then that I smelled this horrid smell. Contrary to other stories, I knew what I was smelling or at least I thought I knew. It smelled like formaldehyde. Because of my medical background I felt probably more comfortable with this situation because I had gone through it so many times before.

We came to a large room and I stopped to look inside. I saw these huge large tanks with computerized gauges hooked to them and a huge arm like device that extended from the top of some tubing down into the tanks. The tanks were about 4' tall so standing where I was I could not see inside them. I did notice a humming sound and it looked as if something was being stirred inside the tanks. I started to walk closer to the tanks and it was at that time that my guide grabbed my arm and pulled me roughly out into the hall. He told me that it wasn't necessary to see the contents of the tanks, that it would only complicate matters. So we went on down the hallway and then he guided my arm into a large laboratory.

I was amazed because I had worked in a laboratory before and I was seeing machines that I had never seen before. It was then I turned and saw a small grey being with his back turned doing something at a counter. I heard the clinking of metal against metal. I had only heard this when I was preparing my surgical instruments for my doctor in surgery. Then my guide asked me to go and sit down on the table in the middle of the room. I told him that I wouldn't do it and he said it would be much easier if I would comply. He was not smiling and I was scared. I did not want to be left in this room with this grey alien!

About the time I was thinking this a human man entered. He was dressed like a doctor, with a white lab coat on and the same type of badge I was issued. My guide went to greet him and they shook hands. I began shaking and I was cold. The temperature seemed awfully cold. My guide smiled at me and told me he would be waiting outside and I would only be there for a few minutes. I began to cry. I cry when I get scared. The grey alien looked at me and turned around to continue what he was doing. The doctor called for more assistance and it was then that one other grey alien came in. The next thing I knew I was very drowsy. I knew I was being examined internally and when I lifted my head, I saw this horrid grey alien glaring at me with large black eyes. It was then I felt a stabbing pain. I screamed and then the human doctor stood next to me and rubbed something over my stomach. It was cold. The pain immediately subsided. I could not believe this was happening to me all over again. I begged for them to let me go, but they just kept on working very fast.

After they were finished, I was told to get up and go into this small room and change back into my other clothes. I noticed blood, as if I had started my period. But, I continued to get dressed and when I came out I saw my guide speaking to the doctor in the corner of the room. I just stood there, helpless. I felt more alone then than I ever had in my life. I felt like a guinea pig. After we left that laboratory I was silent. I was angry at him for allowing this to happen to me, again. But he said it was necessary. Told me to forget.

I see more aliens pass us in the hall. Again, it is as if I was a ghost. I asked my guide to please explain this place to me. He told me it was a very sensitive place and I would be brought back again in the next few years. I again asked where I was and he told me I could not be told for my own safety. We then got into the small transit car and it took us to the other side. It was there that I saw the most disturbing things of all.

Unlike the other women Myrna Hansen of New Mexico who was abducted to the Dulce base in May of 1980, and Judy Doraty of Texas, who had a similar experience in May of 1973 & saw cows being mutilated, I saw what looked to me to be people of all different types standing up against the wall inside a clear casing like chamber. I went closer and it looked as if they were wax figures. I could not understand what I was seeing. I also saw animals in cages. They were alive.

At this point the guide escorted me to the elevator and up through the various levels, following which the transit car took me to the waiting alien craft, at which point I was returned home some 3 hours after the abduction experience had begun. Incidentally, I have also experienced contacts with human like beings from other worlds. One alien by the name of Maijan, who has dealt with me all my life has always worn an emblem of a feathered serpent, possibly symbolic of the ancient Mayan deity Quetzalcoatl. He also claims to have ancestors from the Aztec and Mayan race, as do several of the Telosians, inhabiting the colony under Mt. Shasta, California.