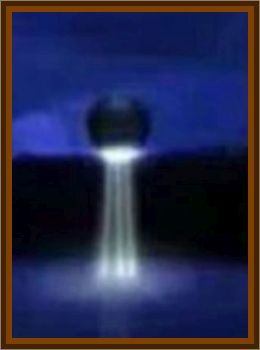 I was 15 and on my August holidays from school and travelling with my father and 2 other men on a surveying trip to the interior of Guyana. We were in the New River/Courentyne River area across from Suriname.

At dawn we were awoke by the noise of all sorts of animals causing a commotion by the river. we rushed from the bushes to the river and saw a large silver saucer hovering over the middle of the river. It appeared to be drawing up water in a upside down funnel shape into a iris shaped opening in the underside.

We watched it for about 10 minutes, then the water spout fell back down and the craft shot straight up until it disappeared.

The others with me were my late father - a surveyor, my uncle - a guide in the interior, and a Amerindian local guide.

A few weeks later in the same general area, we chased a loud sound overhead in thick forest and managed to get glimpses through the thick vegetation of a shiny object that suddenly disapeared.

Our Indian tracker couldn't identify footprints we saw on a sandy beach we came upon that had a fire burning on the sand. It was just flames in a ball that had no obvious souce of fuel. We threw water on the fire but it did not go out. Eventually, we looked around and left.

Things we observed at the campsite were that something with three legs was over the ball of fire. There were some fruits on the beach with bite marks in them. Our Amerindian guide could not identify the friut as from around the area. We saw the bite marks as small with round teeth marks. Some of the foot prints appeared to been shoed and others, smaller child sized were barefooted. Nothing was unusual about the footprints, they seemed human but were spaced close as if the person had short legs for the size of foot. Other claw shaped footprints seemed to have been frolicking with the small prints at the waters edge.

The guide, an expert in forest wildlife could not identify the claw marks. None entered the water and there were no prints coming to or from the sandy beach. It was as if they just dropped down on the sandy beach or jumped off something in the water.

The area seems devoid of wildlife, most unusual, not even insects were around the beach. This existed for about 20' in a circle around the beach camp area. Then at the perimeter of the circle life teemed as usual.

Animal tracks in the sand of the beach area stooped abruptly at the perimeter of a circle that was about 20' round.