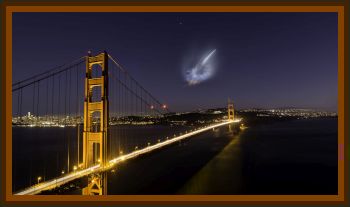 The sun was bright, the air was somewhat hazy, and while it had been foggy earlier that morning, the sky was fairly clear.

My son and I were just getting ready to start working on his book report when I received a phone call. When the call was finished, my son, who has excellent eyesight and is well known in the family for his ability to spot birds and other wildlife, asked me to identify the flying object that he could see from our outdoor third story balcony which faces southwest towards Belvedere Island.

It took me about 20 seconds to see what he was pointing at and, when I did, I could see a black speck that, at first, reminded me of a parachute. But as I watched the object I noticed that, while it was moving slightly in the sky, it was not losing altitude the way a parachutist naturally would.

We own some fairly high power binoculars so I quickly retrieved them and attempted to fix my gaze on the object in question. At first it was difficult to see the object because my arms were shaking slightly and the object was moving around in my view. I then knelt down on my knees, placed my elbows on the balcony railing so as to provide a stable platform, and then focused the binoculars. At this point, I could see the object clearly.

It was a perfectly round dark colored disk, flat, no bulges, and it was in constant motion doing gentle and slow figure 8s tilting and banking and turning slowly. There were no markings on the exterior, no exhaust ports, no lines or markings of any type.

The flying disk stayed in the same small area of the sky, it was in constant motion slowly turning and banking, thus it was not hovering horizontally over a fixed point.

We live near the Golden Gate Bridge and I just checked online and the main tower of the bridge is about 750' high. I estimate that this object was flying about 3 to 4 times higher than the main tower of the Golden Gate Bridge, or about 2,250' to 3,000' above sea level. The disk was flying just South of Belvedere Island, I estimate 4 miles away, and the object appeared to be about 30' to 50' wide. As mentioned, the flying disk was in constant motion and as it turned and banked slowly in the sky, the sun intermittently reflected off its surface with a very bright slightly golden colored reflection.

From this, I guess that the object had a metallic exterior surface.

My son and I took turns looking through the binoculars and when I watched the object with my naked eye, it was difficult to see the small dark speck in the distance, however, as it turned and the sun reflected off its surface, the bright flash was quite noticeable to the naked eye.

There is a fairy high amount of commercial aviation flights in our area and there is also a sightseeing seaplane that operates out of Sausalito and when these planes fly by, we can hear the noise.

The flying disk made no noise whatsoever that we could hear. After about 5 to 10 minutes of viewing, I went inside to get my camera, but when I returned, I could no longer see the object.

I called my girlfriend to report what we had seen, and then my son and I started to work on his book report. After about 20 minutes or so, we heard the very loud and unmistakable sound of military jets flying in our area.

About 3 weeks earlier we had viewed the Blue Angles, F-18s, during Fleet Week and the sound was much the same, much louder than commercial planes. We went out to the balcony and observed 2 military jets circling the area.

This was just after noon or about 12:15 p.m. to 12:30 p.m. We presumed that the jets were investigating what we had just seen but, subsequently, I heard that there was a military fly over for the 49er football game at Candlestick Point, so now I am not so sure.

There is no question in my mind that we saw a flying disk. My son and I could both see it clearly.

About 20 years ago I worked for a commuter airline at the Sacramento Airport, SMF, and I believe that I am experienced at identifying airplanes in the air. What we observed was definitely not an airplane, jet, blimp, ultralight.

Given the time of day, the good visibility, and the location over San Francisco Bay, we figure that somebody else must have seen it as well, although I must admit, if not for excellent eyesight of my son, I never would have noticed it myself.