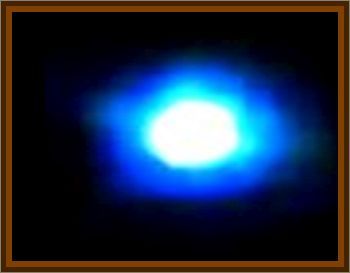 A parachute or basin shaped object giving off a blue light was observed by many residents at 7:00 a.m. Among those who saw it was 19 year old Tiago Machado, a fruit peddler who lived with his family. He had been in bed when he heard people shouting, and upon looking out his window, he saw the object. He dressed hurriedly, grabbed his binoculars, ran to the Zootechnica Institute, and excitedly informed two guards, Francisco Hanse and Benedito Joana, of what he had seen and asked them to accompany him to the site where the object was located.

The trio set out running, each by a different route, because of the obstacles presented by streams and trees and vegetation. Tiago reached the location first and stopped at about 35' from the object, which now gave the appearance of an aluminum disk.

A lid opened on the upper part of the disk and there emerged two smallish men of about 3' 8" in height. Two others could be seen inside the glass enclosed cabin. They appeared to fly down from the opening to the ground.

Tiago later described them as wearing silvery colored clothing, including gloves and boots, and through the helmets, their faces appeared to have a yellowish tinge, their noses squashed at the ends. A tube projecting down from the area of the cabin seemed to be where their hoarse, guttural sounds were coming from.

Tiago could not understand the noises they made.

The creatures seemed to be afraid of the binoculars which he had around his neck, so he took them off and laid them on the ground and then, put them on again, which seemed to reassure them.

Being nervous, Tiago then lit a cigarette and proceeded to smoke. The creatures began to laugh, apparently very amused, so Tiago took the pack and laid it on the ground, pushing it toward the creatures with his foot. One of them extended his hand above the cigarette pack and it rose up into the air to his palm. He then made a quick motion toward his body and the pack disappeared.

The little men seemed to try to converse with Tiago by using sign language and Tiago responded in a likewise manner. The two raised their arms and made the outline of a sphere in the air, then indicated a motion which seemed to Tiago to denote a craft falling or drifting to the ground. These events took only a very few minutes and soon, the shouts of others who were approaching were heard.

The little creatures began drifting up to the top of the disk and entered it through the lifted hatch which had opened when they first appeared. The last one to enter made a gesture to one of the crew inside, then pointed a pipe shaped contraption at Tiago. He gave the handle a turn and it flashed a bluish red ray at the boy’s legs and he fell to the ground. The rim of the ship had been turning all the while that the creatures were on the ground and the central part, which rested on a tripod landing gear, remained still.

As soon as Tiago fell down, the object left the ground and disappeared into the sky at high speed. Others who were approaching saw the little men and the machine as it took off.

One additional detail which should be mentioned is that when the creatures laughed, Tiago noted that their teeth were dark. As our translator, Mrs. Irene Granchi, pointed out, we should note the similarity of the creatures in this incident as well as their apparent ability to fly, to the Close Encounter Of Cussac.