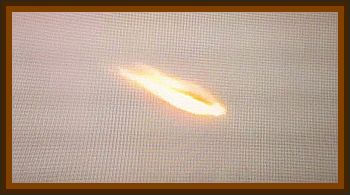 The first actual report of UFO sighting was done by the ancient Egyptians in 1440 BCE. It was reported by the scribes of the pharaoh, Thutmose III, that fiery disks were encountered floating over the skies. It was later recorded on the Tulli Papyrus.

343 BC - According to Diodorus Siculus, the Greek general Timoleon sighted a torch in the sky while he was sailing with his fleet. The torch guided the Greek ships until they reached Sicily.

74 BC - According to Plutarch, a Roman army commanded by Lucullus was about to begin a battle with Mithridates VI of Pontus when the sky burst asunder, and a huge, flame like body was seen to fall between the 2 armies.

In shape, it was most like a wine jar, and in color, like molten silver. Apparently object was reported by both armies.

70 BC - A bright light over the Temple in Jerusalem. On a later day, there appeared in the air over the whole country chariots and armed troops coursing through the clouds, surrounding the cities.

After the onset of the 19th century, the first sighting was in 1801 in Hull, UK. In 1801, as reported in the Hull Packet, a fiery object is said to have appeared over the Humber, an immense moon like globe with a black bar across the center of its face. For a moment it bathed Hull and the Humber in a mysterious blue light. Then, it split into 7 smaller fireballs and vanished.

The first sighting in the 20th century was in New Zealand. Strange moving lights and some solid bodies in the sky were seen around Otago and elsewhere in New Zealand, and were reported to newspapers.