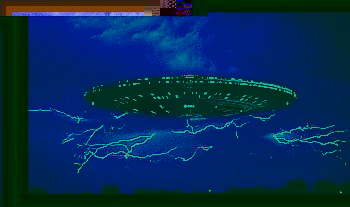 One night during a thunderstorm in july 1976, while watching lightning striking outside, thru the south side facing back door window of family house at age 8, I saw a very large- 300+feet in diameter, metallic disk floating stationary inside of the thunderstorm.

It had lights around outside bottom of disk, and 4 hemispherical protrusions, and bright bluish light in the center bottom.

I was totally amazed to watch the lightning strike the craft several times, and noticed when the light reflected off the highly polished metallic surface.

I yelled for my mother, who came running, and we then watched the craft for about 3 or 4 minutes through the backdoor window. Then it slowly moved upwards thru the clouds and vanished.

My father, who was retired from air force 3 years earlier, was told the story next day, and was very interested. I remember parents talking about an article in the local newspaper the following day, where hundreds of people saw the same thing.

I have never been able to find article, but I know what I saw, and it was the real deal, an unforgetable experience.