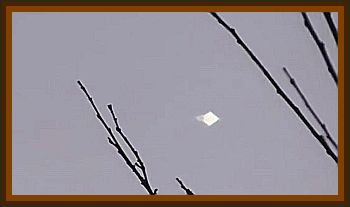 Six members of a farming enterprise were threshing wheat when they saw three objects coming from the general direction of the sun, southwest. As the objects proceeded they gave off a dazzling brilliance. They maintained a level flight with two of the objects changing positions as they flew.

The power of the illumination remained constant throughout the incident, no pulses or flashes. Once the objects reached a direction northwest of the observers, they made a smooth 90 degree turn straight upwards and climbed rapidly out of sight.

One of the farmers was a recent graduate of a two year course in aeronautical design and thought the objects looked like a domed disk when viewed face forward, but were actually like a stubby, wingless, tail less fuselage when seen from the side. About 5 miles away, four other persons saw what they felt were two fast moving objects flying in the distance at level flight before abruptly turning straight up and flying away from the Earth.

This group of people did not know their distant UFOs & Government neighbors.

Grudge apparently lost this case. The only record seems to be the local Offutt Air Force Base investigation found in the files of Air Force consultant J. Allen Hynek. The project microfilms simply note:

Case missing. The case, 6 adult witnesses, 4 independent corroborative witnesses, abnormal aircraft structure and striking flight plan, disappearing straight upwards, can stand on its own as one worth remembering, but it is mentioned here to illustrate the incompetent neglect that characterized the Grudge period.