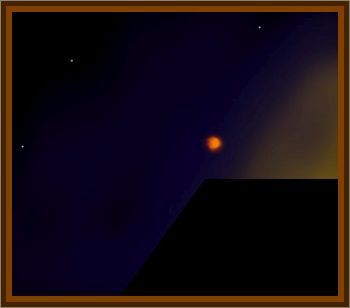 My buddy, Bill and I, and our dates, Just drove in to the parking lot behind Friendly's Ice Cream in Thompsonville,CT, when my date spotted a small golden orange glowing ball in the distant southern sky toward Hartford. In a few seconds, the object was overhead and the shape was that of a bowl, flat on top. It looked about 2" in diameter, but made no sound. It hovered motionless for about 30 seconds, then in a streak lasting about 3 or 4 seconds, was gone in the direction from which it came.

We drove the car to the parking lot in front of Friendly's and got out and ran into Friendly's telling all what we saw, and everybody inside looked at us as if we were dilusional. Needless to say, we were embarrassed. The next day in school, several classmates from other parts of town confirmed what we saw.

The observers were 2 basketball players and our cheerleader dates, ages about 17.

I served in the USMC from January 1953 to January 1956 as a radar operator. It was sometime in 1954 or 1955 in K-3 Korea, Po Hang Dong,while on radar watch, I observed 3 blips on my radar scope which crossed Korea from east to west in about 20 seconds. The object was not identified. I hold a BSME from the University of Hartford, class of 1961.