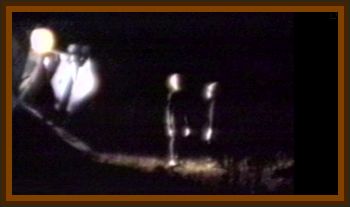 The witness called, saying that he had just awakened and was very, very thirsty even after drinking several bottles of water and wanted to explain what happened to him.

He said that at 1:00 p.m., he watched about 10 minutes of the news broadcast and had an overwhelming urge to go out into the back yard. He saw an orange light above the retention pond in back of his yard.

He said, that the object that he saw was the same one that he saw over the Gulf, but it was straight across, not tilted and about 200' to 300' in the air. It was like a straight bar and pointed at the end, but it may have been a disk. The surface was orange, pulsating, beautiful, flowing like water.

There were 3 squares, then a space and then 3 more squares. It looked so large that he estimated that it could be covered by a blanket unfolded.

He saw it for about 45 seconds and then it completely vanished. The night was silent with even the crickets not making noise. He found it hard to get back inside the house.

He made some noise coming back, but did not awaken the others in his house. He called me at 3:52 a.m., but thought it was earlier, about 1:20 a.m. There was missing time of 2 hours and 42 minutes, during which apparently an abduction took place.

Thomas became very thirsty after this, drinking 4 or 5 large bottles of water at once. He later suffered from vomiting, diarrhea and inability to urinate. None of his neighbors had seen the object.

On August 4, he noticed a slight burning sensation on his chest and discovered a small red triangle just below the skin. His doctor didn’t know what it was, but didn’t think it was anything to worry about. The doctor did find that his Triglycerides were dangerously high, 410, normal 40 to 200, and said that he could be at risk for a stroke or heart attack.

The doctor also found that his Electrolytes were extremely low, and advised him to drink PediaLyte and to eat only fruit and vegetables.

The family had gone to Cape Canaveral to see the space shuttle return.

At a lunch with the astronauts, Thomas’ niece asked about drinking Tang. The astronaut said that they no longer drank it, but used a different formula because they had found that weightlessness caused a decrease of electrolytes in the human body.

This may be significant to Thomas because his electrolytes were very low after an apparent abduction. The witness was fearful of a little girl with dark eyes in the doctor’s waiting room, because her eyes made him afraid as did people who wore sunglasses.

A forensic scientific approach should be a key part of our investigative arsenal in examining abduction cases.