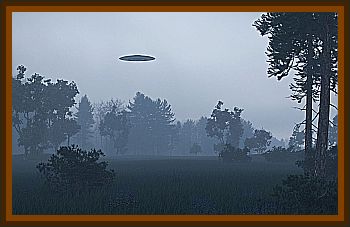 Stella was in a taxi on her way home from work. This is a one way main avenue near the sea.

There was very little traffic on the avenue due to other main streets leading to it being closed for some carnival parade or something. Cars were sparse.

From a distance Stells saw some lights above the avenue that she just took for a plane inbound to Thessaloniki airport, Macedonia.

That’s very usual as a landing route is almost above and along this avenue. What caught her attention though was that the lights were not heading away, but stood still as the taxi was approaching. Also they were more like 3 whitish/pale yellowish lights circulating. Then thought could be some helicopter hovering maybe.

The sight was becoming unusual as the taxi was approaching, When close enough it was so peculiar that she couldn’t resist her curiosity,

At some point she asked the driver to open her window so she could have a better view. She didn’t mention it though, feared of embarrassment, as she wasn’t sure, just curious, and because the driver seemed clearly like the kind of person not flexible enough to cooperate, and because they were passing by already, she made en excuse it was too hot in the taxi and needed some air.

And it was then when she slightly stuck her head out the window and looked up, they were directly beneath it, and she saw the underside of the thing, a somehow elliptic disk looking roughly like the drawings she did that I am sending. It was about the size of 2 or 3 average helicopters, looking like dark grey matte metallic, hovering a little higher than the buildings close to a landmark hotel we have here called Macedonia Palace and three pale yellowish lights were circulating around it. All totally silent.

A small red light right in the center of lighting for a while was the last detail she saw before she had to turn her head back to the taxi to tell the driver to let her off there.

She got shocked that she asked the taxi driver she wanted to get off right there, no, time or conditions for, other explanations. By the time the taxi had to pull aside, get paid and Stella getting off, the thing just vanished.

She stayed there for about 15 minutes and there wasn’t any kind of trace of it, no other pedestrians and just few other passing cars, nobody else seemed to have noticed anything. She then went right away home on foot and drew the thing as the details were still very vivid in her head.