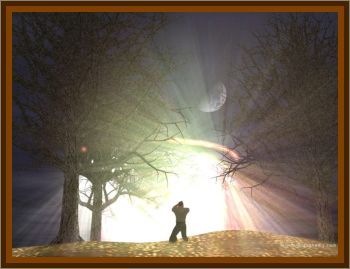 At about 10 years old. My sister was about 16 years old. It is middle of deep night about 2:00 a.m. and I am sound asleep. I am awakened by my sister who is straddling me on all fours on my bed, looking over me, staring me in the face at a very close range. I start to scream, then realizing this person is my sister, she also puts her hand over my mouth. She says for me to wake up, look, watch, & shhhhhh. I'm a little confused and quickly scared from believing my own eyes. There are 3 distinct lights, balls of energy?, in our bedroom.

They're not communicating, nor making sounds, but I'm getting this message that everything's okay, such to the point that neither of us call to our parents for help or safety. I find this extremely strange since we'd holler for them at the sign of a water bug or roach in a second. Our home was a large, old Colonial style, just a few streets over from the Intracoastal Waterway. Main canal for Ports from Houston-Galveston-Port Arthur and Beaumont. Lots of old trees, but no signs of light sources anywhere nearby. We looked to see where they were coming from, but found nothing. This mutual experience of ours was also kept secret. We never even discussed it much among ourselves until many years later.

I used to see things. Figures, silhouettes, sometimes they frightened me, other times seemed intrigued with what I was doing, playing piano in the old living room for instance, many signs of other lives around there that had come and gone or perhaps preparing to come? I don't know. We found an old trunk in the attic one summer that held photos identical to some of the things I was seeing around the house, then, we discovered we needed to discuss some of this stuff. We didn't talk about it much at all, though. I wish we had.

My father had visions of these things too, but not Mom. My sister was spooked from early on. The least little thing would frighten her and she hated to be alone. She was diagnosed with cancer in 1996. In the Fall of 1996 during her radiation therapy, we had another incident together. I was driving her Grand Cherokee Jeep back to her house from a day long visit with our parents. She was tired. it was about 8:00 p.m. We were going westbound on I-10 from Beaumont to Pasadena, Texas. Around Winnie, beach road cutoff area, the night was foggy, normal for Spring & Fall around here, and we couldn't see anything. I mean nothing. It was as if everything simply disappeared or something. What's weird about this evening is that although we could see no traffic, I mean not so much as one car, the whole way, no businesses, no residences, no animals, no lights of any sort. I don't even recollect the road much except that I know I was driving the Jeep. We did however see this object on the horizon a long way off up ahead in the distance. There was no fog there? We began discussing this new fandangled light, wondering what new overpass was up, or just what had occurred because we both knew this road so well, having traveled it for 20+ years.

There were no overpasses of any kind in this particular stretch of the road. Then, this object was literally on top of us. It had traveled a couple of miles toward us, and was all of a sudden traveling with us in the complete opposite direction, but with us. It was so close to the car, I was afraid it might attach itself to the top of the car or hit us or who the Hell knew what. I tried to stay in control, for my sisters sake. She was immediately taken mentally by this object. No beams of light, no floating bodies or anything but many, many brilliant lights around it, as if they were coming from the inside of it, like a holographic display or something. That's the closest description I've found so far.

The brilliance was like nothing I've ever seen. We don't have colors like that, the closest being red and a bluish white. The intensity was unbelievable. I mean, I'm an accomplished designer with color as a specialty. We just don't have this kind of color. My sister was white, frozen, her knuckles were so white and tight, they looked like they might tear apart. Her fists were wrapped around the edge of her passengers seat. She was both non breathing & hyperventilating. I kept slapping her leg and telling her to breathe, then she'd hyperventilate again. It was as if something else was in complete control of her. She wouldn't look away at all, only a slight glance to me at the first of it. Then, her eyes were bulging and fixated on the object. I'm positive they communicated or interacted in some way.

My familiarity with this thing was that the same kind of calming affect came over me, not in a voice, but as if someone put a message onto my brain of everything's okay. This encounter lasted for 12½ - 13 miles. To my memory there were no changes in my car, we did not stop rather, I sped up trying to get away from it. No lighting problems or malfunctions of any kind, that I recall.

At first, I tried to hear it by rolling down the window, only to realize it made no audible sound for us, and fright had me roll the window quickly back up. I almost stuck my head out of the window but heard a clear NO, and didn't. I'm quite spiritual and do ask for divine guidance and protection. Maybe I had it that night, maybe not.

For some reason I think I was protected in that I didn't stick my head out. That thing was so close, 30' above us at most. It was about the same as a local billboard, and around here maybe not quite that high. I couldn't make out the shape because of the fog, but when it stopped, we continued moving away from it.

The shell of the craft appeared to be of non color, possibly dark grayish, possibly even reflective of the environment it was near. But it had a lacklustre look some way. No gloss, no detectable paint, no visible signs or numbers or anything. Just highly unusual lightability. It seemed to be rotating so fast that maybe it could have been made to look invisible. I watched it through my rearview mirror, comforting my sister and telling her it was gone and she could relax. It hovered there in the hollow of the overpass opening, the overpass just before our exit/turnoff towards Baytown. It filled up the two lanes completely with its size, maybe 40' in diameter. Then, it suddenly shot off towards the Gulf of Mexico in yet another direction, due south. We didn't discuss it. We were both pooped. We commented we didn't know what it was.

When we arrived, evidently some time later, my niece greeted us with:

It's about time. What took ya'll so long?

My memory here plays a number on me because I remember looking at the craft against the overpass and it wasn't dark out. But it was dark, we'd left our parents before sunset, maybe 6:00 p.m. or so, because we didn't want to drive at night. But then, I remember the fog, and the darkness.

We arrived at night time, 8:30 p.m. or 9:00 p.m. and this is most odd. This drive time is never more than 1½ hours. I didn't write down the time, but my memory of day and night and arriving late tells me perhaps we missed something. Maybe the entire car was transported somehow. Maybe that's why we didn't see any of the traffic or other businesses that are around that area. I've mapped it, driven it many times since. I know right where it came in and left us.

I'd love some concrete answers but fear what I may learn. This experience haunts me sometimes. My outlook is different now. Other connections I'm becoming aware of, are also pointing towards possible abduction. Thanks for being there.

There's more, my sister began having extreme blood disorder the very next day, to the point that we had to find blood donors to try to compensate for her cells giving out. I'm sure that they were aware of this, possibly caused at least part of it from the extreme level of stress from such an altercation. My sister hung in there for another few months, but left us on January 6, 1997. Only 3 months after this experience. I wish we'd discussed it, but all I was able to do was ask her if she remembered the object and she immediately turned towards me, and glazed over saying Y-e-e-e-s-s-s-s! Her response took me by such surprise that I simply chose to leave it alone for fear that it would cause her only more pain. I wish I'd pursued it with her though. That same night, after she died, I watched a ball of light. I thought then that it must have been her, but with all of this starting to come together in my mind, I'm beginning to wonder if it could have been them. My spiritual beliefs lead me to think it was her or angels or some other celestial good thing. My experience leads me to question whether they could have been there waiting for her all the while and were trying to tell me they got what they came after. I guess maybe only time will tell, eh?

Watching them dance around on the craft but from the inside more so than the outside. But also, there seem to be gaps that are starting to come together for me, and more questions. This makes me uneasy. But I think I might be opening up to face it in my memory. I expressed a lot of this to another person a couple of nights ago, and my Mother informed me that I was screaming/moaning during the night. I never do that. All I can figure is that I must have been reliving something since I had that on my mind and it was so late, I was tired. Was it a beam? Not that I remember. But I can't figure out the fog stuff. Maybe it wasn't really foggy out. Maybe were in some kind of fog like environment, or slightly different dimension. I do feel like something was definitely trying to communicate with me. I told my Mom back then, when it first happened, My sisters death, that I believed she must have been trying to tell me something. I didn't get up, but the ball of light, like some kind of energy, and definitely bluish, swirling, mass of something, but slightly transparent, kept coming straight to me and then racing through the dining room, into the kitchen, and back to me again for a long while. Mostly from about 2:00 a.m. to 4:00 a.m. I couldn't tell many about this, they'd think I was bonkers, but my parents understood.

My father has had unusuals in his lifetime. It struck me as odd, though, because my sister left around 1:00 p.m. in the afternoon. I saw nothing until during the night, more than 12 hours later.