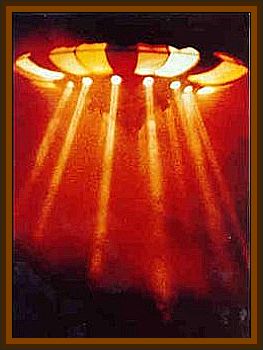 At 8:15 p.m. in Terrest-Houthulst, Belgium, Mr. and Mrs. H.C. were returning from their parents when on the corner of the Sleepstraat and Kleine Sleepstraat streets, they saw a flaming rounded object land.

Before it landed, the upper side of the object opened and 7 little beings appeared. The beings were red in color, great head and ears, little holes for the eyes and short legs.

3 of them came on the ground, one of them walked around the object and seemed to check the 4 legs landing gear of the apparatus. After a sign of one of the beings, the others went inside and it took off.

Mr. H.C. had tried to approach, but the object sent a hot beam of light just before his feet. Many people coming from a cinema saw, from a far distance, the light of the phenomenon.