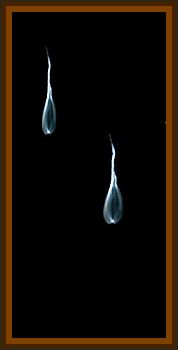 I was at home with my mother, and a friend of hers had come over to visit. I was asked to empty the teapot and make a new one for our guest. I took the teapot out the back door to empty it and as I looked up in the sky I was freightened to see these two massive bright yellow teardrop lights, not pulsating.

These two objects had their larger ends facing each other and the smaller ends appeared turned up resembling the cartoon devil eyes. It was hard to determine if it was one ship and these were the windows or was it two ships.

The sky appeared so dark around these lights. 3 tiny lights were in between the larger ends but unable to say whether or not they may have been stars.

I don't recall any noise.

Apart from the shape, they didn't seem to have a 3D effect and I have no idea how big they actually were.

When I got over the shock I tried to get my mother to come out and witness it, but by the time I convinced her, there was nothing but a bright glow over the hills to the west.

She said it was reflection of the moon. I didn't buy this for a minute and have been curious about what I saw and perhaps sending my story will help me get over the experience. But I kind of want to see another one so I would know that wasn't seeing things. This happened when I was 16, I am now 45. I never indulged in drinking at that age and never drugs.