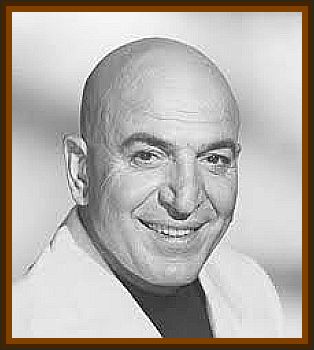 The location was somewhere in Long Island, New York and the date was June 26 1955 one late night:

Telly Savalas, the famous character actor, told Hollywood reported Dick Kleiner a weird story involving a black Cadillac. It happened when Savalas was young and flat broke. His car ran out of gas on Long Island, and after he started walking, a black Cadillac, seemed to appear from nowhere, and the driver offered him a lift. The driver was dressed entirely in white, a refreshing switch, and said very little. But at one point he offered Savalas a dollar to buy some gas. The actor insisted that he man write down his name and address on a slip of paper so he could be repaid.

They found a gas station, and the driver waited while Savalas bought a can of gas. Then they drove back to his own car in silence.

I know Harry Agannis, the driver said suddenly, Savalas asked who Harry Agannis was. He’s a utility infielder for the Boston Red Sox, the man answered. That was the end of the conversation.

The man waited while Savalas poured the gasoline into the car, gave him a push to get him started, and then drove off with a wave.

The next day Savalas was shaken by newspaper headlines announcing the sudden death of Harry Agannis, He decided to call the phone number on the slip of paper given to him by the man in the white suit.

It was in Massachusetts, and a woman answered. Savalas told her he wanted to speak to Bill, the name on the paper. There was a pause, and another woman came on the line.

I just met Bill last night, Savalas began, and something happened, and I wanted...

You met him last night? she interrupted, choking on sudden tears. Then she told him that her husband Bill had been dead for three years.

Make what you will of the incident, Savalas spoke about during numerous interviews and never changed his story. Of course all UFO enthusiasts know about the men in black, and their famous ride, (in most cases) a black Cadillac.