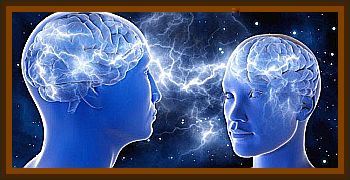 William Cole was in his bedroom. Although he was wide awake, his girlfriend was fast asleep beside him.

He was contemplating waking her to tell her of the strange lights he could see moving behind the trees at the back of their house. He watched the lights a little longer, seeing them rise above the treetops in the form of a very definite craft. Then, the message appeared in his thoughts.

This was the proof of extraterrestrials. However, the voice would continue, he wasn't to tell anyone. He could, though, wake his girlfriend and they could come onboard the ship.

He woke his girlfriend telling her to quickly go to the window. She did, and she too saw the large, saucer shaped craft hovering over the trees. He asked if she could hear anything in her head. She concentrated for a second before stating:

It's telling us not to tell anyone and that we can come onto the ship.

The pair dressed and quickly began to make their way downstairs and out of the house. However, when William briefly turned around, his girlfriend was heading back inside insisting she had to wake her roommate.

Telling her not to do so, he then rushed outside, intensely eager to look at this apparent otherworldly craft up close. As he rushed forward, he could see a yellowish light coming from inside of the now landed craft. The walls inside would boast tiles, and in the center of a large room was a tube filled with liquid.

Suddenly, instead of rushing onto this vehicle, he was once again at the door of his house. As he ran forward once more, the craft was now lifting up into the air. As he continued to watch the object make its way upward, his girlfriend and her roommate joined him in the garden.

As the object continued to rise, right before their eyes, it changed its form. Within seconds, gone was the saucer shaped craft. In its place, a standard United States cargo plane now cut through the skies. Even the sound of its engines was authentic. They continued to watch the plane until it disappeared from sight over the trees.

As he stood there attempting to process what had just happened, William could feel waves of mental energy attempting to block and confuse his mind. Perhaps adding to this was the sound of his girlfriend's roommate, who would insist the craft was, in fact, just a plane. The following morning, William's girlfriend would also state the experience was probably in their minds somehow.

William, however, was privately insistent that this wasn't a figment of his imagination. Or some collective hallucination. He knew it was real.

He would state in his report: What happened inside that ship, I can't recall. But I remember running up that ramp.