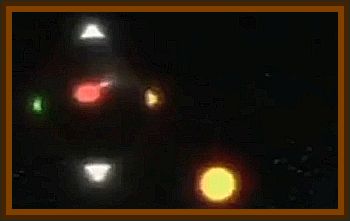 While driving to work, a cylindrical object passed across the road in front of my car at an altitude of about 200' and about 300' ahead. The object was cylindrical with a height to length ratio resembling 3 steel barrels end to end but twice the size. Object was totally quiet, moving too slow to actually be capable of flight, and had no aerodynamics to support flight at all such as wings or other control surfaces.

I even checked overhead for a helicopter or anything else that could be transporting the item. Both ends of the item were blunt. I believe some sparking was evident at the rear with a trace of smoke, but not like a jet or rocket as we know it. Color was gray to metalic with a few blinking lights.

I stopped my car so I could follow the item until it disappeared behind a hill on the northwest side of Tehran's city limit.

The interesting thing is that the item passed 90º over the eastern end of Tehran's Mehrabad Airport main runway traveling due north.

Arriving at work at the airport I checked with military and commercial personnel to see what was going on thinking someone else had to see it considering the location. Apparently no one else had seen it and no reports were filed. I never spent too much time thinking about it after that until 3 years ago when I saw the 1976 reports and thought someone had the dates wrong.

The smaller object in that report was similar to what I had seen a year earlier.

For info, at that time I was a USAF Master Sergeant working at the MAC terminal located on the Eastern aircraft parking ramp at Mehrabad. I was the ranking NCO and was a jet aircraft mechanic.