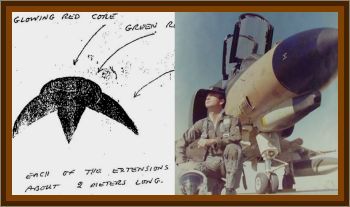 At approximately 12:30 a.m. local time, over Tehran, Iran, the Imperial Iranian Air Force command post at Tehran received 4 reports by telephone, from civilians in the Shemiran city district, of unusual activity in the night sky. Some of the callers reported seeing a bird like object, while others reported a helicopter with a bright light. When the command post found no helicopters airborne to account for the reports, they called General Yousefi, assistant deputy commander of operations. General Yousefi at first said the object was only a star, but after conferring with the control tower at Mehrabad International Airport and then looking for himself to see a very bright object larger than a star, he decided to scramble one F-4 Phantom II jet fighter from Shahrokhi Air Force Base in Hamadan, approximately 175 miles west of Tehran.

At 1:30 a.m., the F-4 took off and proceeded to a point about 40 nautical miles north of Tehran. Due to its brilliance, the objects were easily visible from 70 miles away. As the F-4 approached a range of 25 nautical miles, he lost all instrumentation and communications. UHF and intercom. He broke off the intercept and headed back to Shahrokhi. When the F-4 turned away from the object and apparently was no longer a threat to it, the aircraft regained all instrumentation and communications. At 1:40 a.m. a second F-4 was launched, piloted by Lieutenant Parviz Jafari and a F-4B of VF-111 on the USS Coral Sea armed with AIM-9Ds. Jafari would eventually retire as a general and participate on November 12, 2007, at a National Press Club conference demanding a world wide investigation into UFO phenomena. The backseater, Jafaris, acquired a radar lock-on at 27 nautical miles 12 o'clock high position, with the VC, rate of closure, at 150 nmph. The radar signature of the UFO resembled that of a Boeing 707 tanker aircraft. The visual size of the object was difficult to discern because of its intense brilliance. The light that it gave off was that of flashing strobe lights arranged in a rectangular pattern and alternating blue, green, red, and orange in color. The sequence of the lights was so fast that all the colors could be seen at once. The object and the pursuing F-4 continued on a course to the south of Tehran when another brightly lit object estimated to be one half to one third the apparent size of the Moon came out of the original object. As the range decreased to 25 nautical miles, the object moved away at a speed that was visible on the radar scope and stayed at 25 nautical miles.

This second object headed straight toward the F-4 at a very fast rate of speed. The pilot attempted to fire an AIM 9 Sidewinder missile at the object. But at that instant, his weapons control panel went off and he lost all communications, UHF and interphone. At this point, the pilot initiated a turn and negative G dive to get away. As he turned, the object fell in trail at what appeared to be about 3 to 4 nautical miles. As he continued in his turn away from the primary object, the second object went to the inside of his turn then returned to the primary object for a perfect rejoin.

Shortly after the second object joined up with the primary object, another object appeared to come out of the other side of the primary object going straight down at a great rate of speed. The F-4 crew had regained communications and the weapons control panel, and watched the object approach the ground anticipating a large explosion. This object appeared to come to rest gently on the earth and cast a very bright light over an area of about 1.5 miles. The crew descended from their altitude of 25,000' to 15,000' and continued to observe and mark the object?s position. They had some difficulty in adjusting their night visibility for landing. So after orbiting Mehrabad a few times, they went out for a straight-in landing. There was a lot of interference on the UHF. And each time they passed through a mag. bearing of 150° from Mehrabad, they lost their communications, UHF and interphone, and the INS fluctuated from 30° to 50°. The one civil airliner that was approaching Mehrabad during this same time also experienced communications failure in the same vicinity, Kilo Zulu, but did not report seeing anything.

While the F-4 was on a long final approach, the crew noticed another cylinder shaped object, about the size of a T-bird at 30', with bright steady lights on each end and a flasher in the middle. When queried, the tower stated there was no other known traffic in the area. During the time that the object passed over the F-4, the tower did not have a visual on it but picked it up after the pilot told them to look between the mountains and the refinery.

During daylight, the F-4 crew was taken, by helicopter, out to the area where the object had apparently landed. Nothing was noticed at the spot where they thought the object landed, a dry lake bed. But as they circled off to the west of the area, they picked up a very noticeable beeper signal. At the point where the return was the loudest was a small house with a garden. They landed and asked the people within if they had noticed anything strange last night. The people talked about a loud noise and a very bright light like lightning. The aircraft and area where the object is believed to have landed are being checked for possible radiation.