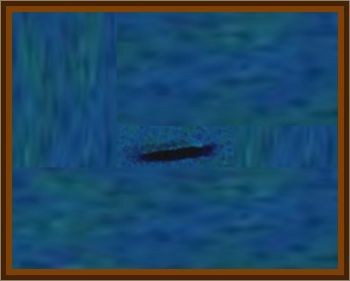 Steve Robbins was working as plant operator for Phillips Petroleum Plant on Teesside. He was on night shift and at ten minutes to midnight he was returning to the control room when he looked up into the sky and saw an enormous flying object which he describes as about 100' in length and 25' wide. It was flying between two towers and he was able to estimate the height of the object to be about 120'.

Travelling on a downward trajectory, he thought it was going to hit something.. It was not travelling at any great speed and eventually Steve observed it right overhead. From this angle he describes it as cigar shaped and a dull bluish steel color with a luminescence, like a neon light. It shone, particularly around the perimeter, and was pulsating a bright white/yellow light. There was no sound. Eighty yards away from where he was standing there were four enormous crude oil receiving spheres and by this time it was so low he felt it was going to hit the spheres. It didn't....it cleared them with what seemed like feet above. With great trepidation Steve jumped on his bike and pedalled quickly around the roadway to behind the receiving spheres. There was absolute nothing there!

He rushed into the control room where his colleagues were having a meal, whereupon they all enquired as to what was wrong as he was so white he looked as though he had seen a ghost. He explained what had happened, to both his colleagues and supervisor, who all immediately went outside to investigate, but there was nothing there. His supervisor contacted Teeside Airport to find out about aircraft activity. However, there had been no aircraft either landing or taking off within the last hour.

Fylingdales was then contacted and Steve was asked questions pertaining to a UFO report. Steve felt there must have been someone else who had seen this object, and therefore proceeded to call various departments across the plant. He received a call from a security guard at the tank farm which was situated one and half miles away, who had also seen this object and described it in a similar way to Steve as well as heading in the direction that Steve had observed it. The supervisor was in fact already concerned about security at the plant due to the fact that four weeks prior to these sightings another employee had report an object trying to 'land' on the main road at the plant.

A few days after these events Steve experienced some electrical problems within his home starting with his television bursting into flames, while he and his wife were watching it. They had to throw it through the window. The television was three years old. During a three day period and always when Steve was there many other electrical appliances malfunctioned. A hoover, toaster, hairdryer, iron and main alarm clock all failed and even a battery powered portable radio and electric drill failed. The electricity board were contacted and they installed a mains voltage recorder, but they reported there was nothing wrong. Neighbors had not experienced any electrical problems. I talked with two electrical engineers independently about these electrical problems, and they were puzzled about the electrical events.

Approximately two weeks after these events, Steve began to experience some inexplicable events in his bedroom. The first time this happened, he was lying in bed asleep when he was awakened by a high pitched humming in his ears. His first realisation was that he was flat on his back and that he was unable to move a muscle. He felt strongly that this was not a dream, that he was awake and could move his eyes. He was aware of the room about him and the darkness. He tried to move, but couldn't. When his eyes adjusted to the darkness he realised that there was somebody in the room...three or four figures dressed in black...barely discernible in the darkness apart from dull cloak like habits.

He wanted to scream but couldn't. He remembers a slight gurgling from his throat that is when he said they communicated with him, not in voices as he remembers, but like telepathy. He was told that they would not harm him or his wife, who was in bed next to him, and family, two sons. He tried to wake himself up, still believing that must be a dream, but it was not. Still terrified, he tried with all his will to move a muscle, but could not. He could feel sweat trickling down his forehead into his eyes and hoped to God his wife would not awaken. They communicated, not to worry, and that she would not know anything about this, and He remembers thinking, 'what the hell do you want'....'just you, for a little while' was the reply.

Some time later Steve felt able to move again and he got out of bed and went downstairs, where he consumed several cups of coffee....it was dawn. He felt grimy and dirty, as though he had been on a long journey. He had several more of these experiences over the next two years, although he never actually saw the hooded figures again, only sensed their presence. Since these events occurred, Steve has experienced several precognitive dreams, which he describes as totally different from other dreams, disturbingly powerful and compelling, with a real quality to them that is quite impossible to ignore. Significant points resurface at any time throughout the day for months, years afterwards and they just will not go away. Among these 'vision-type' dreams are the Chernobyl and Lockerbie disasters.

These dreams which occurred, six months prior to the events themselves were so specific and had such clarity that when he saw the news about the Lockerbie disaster he was in total shock. In fact when I interviewed him and talked specifically about this dream with him it was so emotional for him that a respite was taken from the interview.

Another change that has occurred in Steve since his sighting is his ability to intimately tune into people upon first meeting them. He finds this ability extremely disturbing and intrusive. Steve has been receptive to other unusual phenomena from being very young, 6-7 years old, ranging from out of body experiences to being aware of communication from somewhere else. His grandmother on his maternal side also experienced paranormal phenomena.