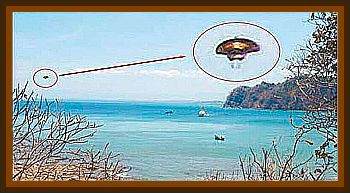 In the afternoon of April 5, 1948 Holloman AFB personnel reported having witnessed an object in the shape of a disk, 100' in diameter, executing a series of violent turns and maneuvers.

It is worth making a note of the dimensions of the disk as estimated by these competent observers.

Another disk was seen the same day displaying similar behavior at Manila.