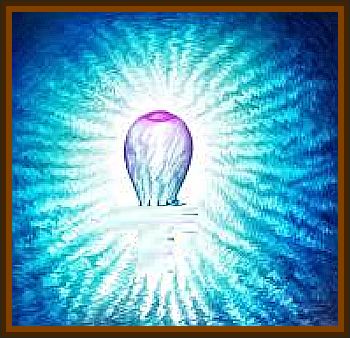 It was a clear sky, no moon, I was 12½ miles from this huge electric green light bulb that appeared in the nothern sky, from where I was standing on the shores of Lake Taupo, NZ, fishing for trout.

This light was very wide; I held up my hand and at full arms length, the light was as wide as my flat palm - 4" wide

It floated down with very small red sparks being ocassionally emitted from the 'socket' end of this bulb shaped apperition. It was described as space debris re-entering the earths atomosphere.

This is hard to believe because the light had a scissors cut edge, not fuzzy or ill defined, like facing a torch light would appear.

I am a writer now and if you have any theories I would appreciate the possible relevance of your information. This all happened above a large geothermal power source near Taupo.

Peter I had to photograph using a flash and to get the effect I had to slant the camera so as to get the illumination that is inevitable over or about the green orb. The moon was not there as it was a moonless night. which made the appearance of this phenomenal occasion astounding.

I will try the Taupo paper again and will forward whatever I find out. I would only be able to imagine as to their response at that time being non alarmist to some degree.

Definately I will send you what I can or cannot find, the moon is in the picture it is up in the right hand corner, it is so small in relation to this light you have perhaps dismissed it.