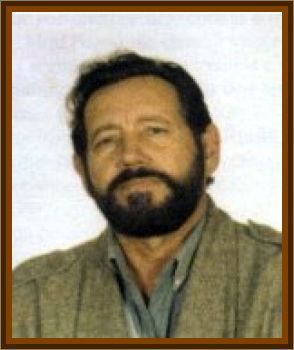 At a certain point, being 7 miles from the home of his son, Maximino Tasca he was traveling to, and little before arriving at the turnpike that gives access to the Tozzo Farm Estate, he says, he was urged by a strange force, or an inner command to enter a dirt road.

He thus left the road going to the BR-282 highway and entered the dirt road. After a few yards in the road, he soon saw an object ahead, that he initially thought to be a bus, as, he says, it had the white greenish colors of the bus of the local line. It was rectangular, with small windows around. He soon realized that this object of ashy color was hovering about 3' above the ground and had no wheels.

He stopped the car, turned off the headlight, stepped out, locked the doors and walked 35' in the direction of the strange object. The rectangular windows were laid out in a row that had a light curve at the ends of the object. At a distance of 5' - 10', Tasca felt heat waves and decided to go back to the car.

But when he put his hand in his pocket to take out his key, a carpet of white/red light, roughly 3' wide, left from the lower part of the object, and went in the direction of his feet. This carpet took him in the direction of the object, but he never remembered what occurred starting from a few yards of the ship, how he entered there and what occurred in the following minutes.

He nevertheless remembered to have opened his eyes and to perceive that he was lying in a completely obscure and rather cold environment, unable to move, except for his feet, which he could press against something solid and cold. As time passed, the cold increased and its breathing decreased. Seized by panic, he thought that he had been buried alive and hopelessly shouted for help.

After some time the temperature and his breathing became normal again. He then heard noises of footsteps, which he thought came from 3 or 4 lights, and small people. They remained at its side, and he perceived that one of these people, on his right, started to poke at the articulation of his body, and that it was repeated on his left side, Tasca thinking that these pressures were made with the tip of some object. He heard growls, which increased between the beings, as if they spoke between them. Then, three beings carried him towards what he thought to be another room.

They left him lying on a plan and they exited. A light was turned on and he instinctively closed his eyes. When he managed to open them, he saw that the environment was completely illuminated, but that there was not the least kind of source of light, neither shades or lines which would have indicated edges, doors, windows or any other detail of the walls.

When he turned to the right, he noticed that his clothes was folded and that his socks were on top of his shoes. He got dressed and, moving towards one of the walls, touched a finger on the surface and noticed that it was neither cold nor hot, only smooth. On his right was as a door in the shape of an ogive giving the impression that some energy crossed the wall in the direction right to left. Through this door, a woman of a strange beauty appeared, who reminded him of the actress Bruna Lombardi to him.

Of a small size of 4', she had smooth hair which fell on her shoulders, of straw color, she had slanted blue eyes, distant from the base of the nose. She carried an indigo blue clothing, which went a little below the knee, with a belt of the same color comprising a lace with the front and, at the level of the bust, there was a type of seam in relief in form of a reversed T. She had smooth and blue sandals, and no other kind of ornament.

She came in with the left hand on the chest and the other open, raised at the level of the head, and initiated a telepathic communication. She said, without moving her lips:

Stay calm, I am of peace and love.

At this time, Tasca heard some sort of melodic music, reminding a bit of violins, that lasted roughly ten seconds. When he wondered in thought from where she came, he understood:

I am Cabala, messenger of the world of Agali. I come in a mission of peace and love. He asked her where they were and she answered that they were in the flying saucer, under the ocean, 600' below sea level. As he was naked and was disturbed by her presence, the woman calmed him by saying that he was going to drink, and that all would be fine.

She him gave what seemed to be a metallic tube, that she took from a sort of rack with red buttons, and contained a liquid that Tasca felt had neither taste nor odor. When swallowing it, he did not feel the liquid to go down by the gullet. Cabala took the tubes and positioned them back. She turned in the direction of the other wall, where a kind of sofa has now appeared.

By taking off her clothes, she clearly made Tasca understand that she desired to make the love with him. In spite of the situation, he succeeded getting aroused and undertook sexual intercourse with her. Tasca related that she did not show signs of pleasure during the sex.

The intercourse consumated, she moved away, put on her clothes, and transmitted the message:

We have both been chosen.

He then asked why he was chosen since he did not think he was anything special, and he said she told him he had been selected because he believed in her existence, that she had desired this moment, and because he was gifted of the cosmic spirit. Then Cabala stated that he would carry message for the people of the Earth. He was surprised this choice, because he knew he did not have a very good memory.

She moved again towards the rack and took some sort of crown, or tiara, formed of a series of half circles in green, yellow and red colors. On each half circle, there was a 1" device roughly in the shape of a cross. She put this tiara on his head, telling him that he must repeat the message twice and then he would not forget it. He then recited the 438 words message which, in short, spoke about the need for deactivation of nuclear weapons and announced the beginning of a new era for mankind, which was to get ready by finding the solution of the enigmas of the world and starting various ecological projects.

The message is rich in the blatant naive absurdities in so many alleged contactees messages, for example, it says that in case of a total nuclear war, the Earth would be thrown out of its celestial course, and who would influence other dimensions and parallel worlds linked to the Earth and currently ignored by mankind. The message predicts strange telluric demonstrations and celestial signs of magnificent splendor and worrying beauty; all that did not occur so far. Some Masters of the Wisdom of Suma, are predicted to return to a renewed Earth, and mankind would then live happily, without aging and with the power to resuscitate the dead.

Then, she withdrew the crown, and kept it. She came out by the same door, which was closed again. The light turned off and Tasca felt the presence of same beings as before, who drew on his shirt and grunted to make him understand he should lie down. He perceived that the beings went away, and he fainted. When he opened the eyes again, he was lying in the ground on a slope, and from the height of the Sun, he calculated that it was approximately 6:00 a.m.

He heard the noises of cars, which indicated a nearby road. Still feeling numb, he remembered the experience that had occurred, the message of Cabala, and felt happy to be back on the Earth. He stayed there some time, and noticed that his watch had stopped at 10:05 p.m. He stood up, took some steps, saw the Diesel Electrotype Batistella plant. He now knew that he was roughly 7 miles from home, and after several attempts, he managed to call his relatives.

All were relieved to know that he was well. He decided to return by foot and, on the way, was recovered by his son who was looking for him in San Carlos, a city close to Chapeco. Being given his psychological state, he was taken along to a First Aid center where he was taken care of by Doctor Júlio Zawadzki, who prescribed him sedatives. This doctor asked him whether he had some physical damage and as the answer was in the negative, he went back to the house of his son in law where all his relatives awaited his return with emotion.

At 1:00 p.m., he decided to take a bath. When he removed his shirt, his parents indicated with surprised a mark on his ribs, which seemed to be a burn produced by a heated iron, and they found strange marks on his backbone, between the scapulas. The same day, he went back to the First Aid center to see Doctor Júlio Zawadzki, who observed the wounds. Surprised, the doctor revealed that he never saw anything like it.

The next day, Tasca turned over to the consulting room, where were two other doctors, Doctor Madalozzo and Carlos Reis, who thoroughly analyzed his wounds. They carried out several examinations and pressed their fingers on the wounds. They were puzzled that Tasca did not show any kind of pain when they touched the wounds.

The three following days, he did not feel any hunger and practically ate nothing. On Sunday, at 2:00 a.m., he felt bad and vomited. He could feel a white blackberry taste, corresponding exactly to the contents of the second tube which he had drunk in the presence of Cabala. From this day on, his appetite was back to normal.

Tasca very quickly gave many interviews to the newspapers, radios, televisions, and wrote a book, telling of his adventure; he is regularly a guest in the UFOlogy conferences of the country.

He was subjected to hypnotic regression sessions by researchers in quest of the observation of the veracity of his really astonishing case. He believes that he was predestined by the extraterrestrial, and that he thus had since childhood, visions of probes, unidentified objects and extraordinary phenomena. Numerous ufologists have investigated his claims, starting by Dr. Walter Büller of SBEDV, Brazilian Society for the Study of the Flying Discs, of Rio de Janeiro.

Büller, with a magnetometer, observed evidence of strong magnetism in the loop of Tasca's belt, in the bumper of his Brasilia car, exactly at the side exposed to the object. The anomaly was also detected in the neutral power cable of a pole near the spot of the encounter.

Tasca was a guest at the The First World UFO Forum, organized by A.J. Gevaerd, from Brazilian UFO Magazine in December 1997. The 'W' mark was still visible in 1992. Tasca is single, the marks on his body which he indicates to have been examined by three doctors should have been recorded in writing, which would have been easy to obtain. The magnetic anomalies mentioned by Walter Büller cannot be convincing enough as they are too easy to create for anyone having access to radio equipment such as a bulk eraser. It is probably not necessary to point out that the story resembles that of Antonio Villas Boas in the same country decades earlier and numerous such accounts of alleged contacts with aliens bringing a message to humanity with a content very much sounding as a rather human mythology.