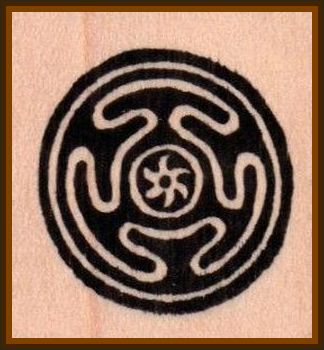 The appearance of the Disk symbol in early Bronze Age iconography in Britain.

It often appears in conjunction with a Depiction of the pestie or Dragon. It's the prevalence of the so called sun wheel in pre Celtic iconography, and the Discoid appearance of many burrows and mounds.

It's also pointed out that what many scholars have called a sun wheel is, in fact, often Depicted as a winged disk, much like the purported layout of the Avebury stones. And also points out that many cultures have a custom of setting wooden disks and hurling them through the air to repel evil, usually at night.

The wheel is often named for Taranis, the thunder god, who rumbled and boomed as he moved through the sky. Sound familiar? skyquakes? It also often seems to have legs as well as wings.

The Eye symbol, related to the one eyed god Odin and the eye god Horus, is also prevalent in the Bronze Age culture, and there are numerous reports of so called Eye Disks in UFOlogy.

Other UFO Designs, such as the conjoined Diss, cloud cigars, and the Dome, appear replicated as curious Bronze Age artifacts from Britain.

In many cases, the Disk is depicted in battle against the serpent, which is assumed to mean the Disk represents the forces of the sky, which are good, battling against the forces under the earth, which are bad. This design appears in numerous forms in mythology, with the Dragon or pestie coiled around the base of the world tree, and the thunderer in the Disk above the tree descending to battle it.

Yet in pre Christian and pre Norse legends, and in China, the Wyrm is not seen as evil. While it is blamed for toothaches and other misfortunes in many cultures, in its earliest appearances in iconography it is a symbol of fertility and renewal. Many seem to think that lake monsters and the dragon in general are evil, malevolent forces.

Yet they do not become thought of in these terms until the first sky religions, and the sky disks, arrive. The reason for this sea change in mythology is discussed by Gimbutas, who thinks Old Chthonic Europe was overrun by sky and thunder god worshiping nomads from the north, the Kurgans.

This mystery is worth more examination…