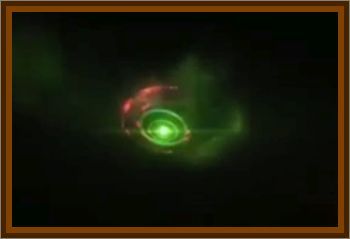 That was when Air France's agency personal awaited the arrival of the air mail, delivered by a Lockheed Constellation. One hour after the arrival of the Constellation, the mail has already been distributed and members of the Air France agency, among which Mr. Edmond Campagnac, former military officer, and at that time technical director of Air France in Tananarive were quietly chatting together, close to the Avenue of the Liberation, the largest street in Tananarive.

Somebody sees in the sky an electric green ball descending straight towards the ground near the Palais de la Reine. He points at it and everybody watches. The phenomenon disappears behind a hill, and they all expect to hear a mighty explosion when the thing hit the ground. But the green light does not hit the ground.

It reappears a minute afterwards, even bigger. It makes a circle over the higher parts of Tananarive, a city built on and inside a series of hills with a horseshoe Configuration.

The UFO then proceeds to fly above Avenue of the Liberation, at an altitude of some 300' in front of tens of thousands of amazed inhabitants. When it flew in front of the Air France personnel, they could all get a good look at it.

Mr. Campagnac realized that the electric green light looks like a kind of lens shaped plasma, of approximately 120' length, the size of a DC4 aircraft.

This green lens is closely followed by a flying machine with a distinct silvery metallic aspect and the shape of a football, also 120' long, At the back of this metal machine, bluish exhaust flames are seen.

The craft was totally silent.

Campagnac, in his testimony, which he often publicly offered, explains that the craft did not even make the sound of swishing a flyer would make through the air.

In this case, it is noticeable that the estimate of altitude is not subject to doubts, indeed, while flying above the buildings of Avenue de la Libération, the craft also passed in front of the hills in the background, not with the sky as background.

Several physical phenomena were observed: first of all, the witnesses in the whole city could note that public lights and shop lights died out exactly at the moment the craft passed above them, and functioned again at once behind its passage.

Then the inhabitants quickly noticed that barnyard animals, dogs in the whole city, were howling or barking. At one time during its travel above the city, the UFO flew above the animal park where peasants keep the animals to be sold at daytime at the city's markets. All these animals entered a state of total panic when the object flew over them, though when airplanes flew over them as usually, for example the mail plane one hour before, the animals did never show any such reaction, although airplanes are noisy and the UFO, again, was totally silent.

After having flown over Tananarive, the machine set out towards the West. Two or three minutes after, the estimate while being with this approximation, a similar machine, or the same one was observed at 95 miles South of Tananarive above a farm school. There again, the herds were seized by panic.

The farm director had to call for reinforcements in order to bring back the animals which run away in all directions, risking death in marshes. It is this call to reinforcements which made the witnesses of Tananarive aware of this second observation.