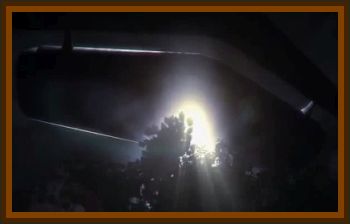 Jared Lee, a graduate student at the University of Florida, and an aerospace engineer at the time, relates a riveting UFO encounter he had with his family. Lee was 13 years old at the time of the event.

On the night of the encounter, he was with his parents, who both worked for the State of Florida. They lived in the sparsely populated town of Havana. The family has gone to Tallahassee, picked up a pizza, and arrived back home about 10:00 p.m.

Exiting their vehicle to go inside, Jared noticed something unusual, there were lights coming down from the top of the nearby trees. He called his parents’ attention to them.

The family thought at first that what they were seeing were hunters in the forest shining their lights to locate a deer. The lights appeared to be scanning the forest floor. The trees were approximately 60' tall, and the family pondered:

How did they get the lights to the top of the trees?

Jared’s father was visibly shaken, and this was the first time that the boy had ever seen his father afraid. The car horn began to sound, and to the left side of the area the family watching, a large glowing orange ball of light began to move. Then to the right side, a large blue/green ball of light followed suite.

Both of the lights were moving up to where the original lights were. Then the two balls of lights disappeared. For a brief moment, there was nothing but darkness.

Then a large beam of intense, glistening white/gold light beamed down to the forest floor illuminating the entire forest area. At the top of the light, a large UFO became clearly visible.

Jared described its size as unbelievable.

The craft sat hovering for some 10 to 15 minutes. It never made a sound. Then the object simply vanished, and was not seen again. What this was and what its mission was is undetermined.