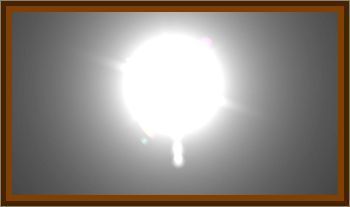 This event took place in the late 1950s, of that I am for certain. I am thinking it was more in the 1958 or 1959 time frame. However, I documented the date to match up with a similar sighting that was entered earlier. The other documented sighting was just too alike not to be related.

Some friends and I were talking in the front of a neighbor’s house when a sphere of light caught my attention on the horizon. I glanced up, seen the object, pointed to it and told my friends:

They in turn looked up and we all watched the object travel the length of the horizon until it went out of sight. The object entered the horizon from the West and exited to the East.

We were starting to discuss what the object was, when an Air Force jet came over the hill exactly where the object came into our view, and proceeded to follow the object across the horizon in a west to east direction. The object and the jet were about a quarter of a mile to half a mile away.

The entire event lasted no more than 15 seconds.

What we saw can best be described as a very distinct dull light. The object made no sound that I could make out. The color was a medium gray. If you take a flash light and shine it across a cinder block wall you could get the same look.

At the time I saw this object, I was just a regular kid trying to grow up in rural WV. This event has been rock solid in my memory since that time.