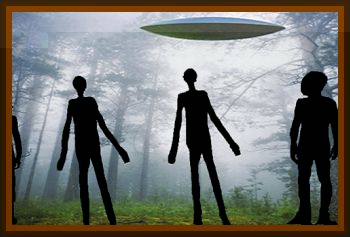 9 year old I. Chebotaryov was alone fishing for his family’s meal and was about to return home when he watched a giant plate descend from the sky.

The saucer smashed into the water causing a strong impact and creating a fountain of water spray all around the witness, which totally soaked him. The plate was about 15' in diameter, its hull was metallic reflecting the rays of the sun.

Incredibly the witness felt no fear. The disk had descended on a sandbar, slightly covered by water only several feet from which the boy had been fishing.

Just then bubbles appeared around the disk and a man came out from the disk. The man was dressed in a silvery overall. He jumped from the top of the disk and approached the witness. He stopped at about 20' from the boy. His head was completely hidden under a non transparent, oval shaped helmet, and he had something resembling a large can behind his shoulders made of a dark toned material resembling tinted glass.

The alien was holding a blue stone on one of his hands and had a small sack dangling from his chest area. Both witness and alien stood frozen for about 3 minutes. The alien was stubbornly silent, so the witness’s patience gave out and he asked the stranger if he was from the Moon. After a long pause the alien spoke in pure Russian language:

No, I am from another planet.

What is the name of your planet? the witness asked.

Apparently the alien ignored this question and again after a rather long pause, he said:

Many surprises await terrestrials, and they will be happy for them.

Please tell me about your planet.

The alien ignored this question also, and he pointed to the disk and replied:

If you want, come into my ship and soon you will be in my planet.

At this point the witness became concerned about the proposal, knowing that his family awaited him for dinner and that he did not know if he would ever return from the trip.

He answered in a loud voice:

I do not want to fly with you, and I want to go home. My mother waits for me there. We are going to eat fried fish for dinner, and he pointed to the bucket filled with fish.

It’s a pity that you do not want to come.

After this he turned his back and walked back to his disk. At this moment the boy was surprised to notice that the alien was not wearing any footgear. He appeared to be barefooted, his long feet ending in long toes similar to humans.

As the alien approached his ship, he told the boy he could tell people of the encounter but warned him that no one would believe him. He then bade goodbye and climbed into the disk and vanished inside.

The object rose up, hovered briefly, and then it submerged into the water just like a submarine. At this point the witness took his bucket and went home.