Near Miss With UFO 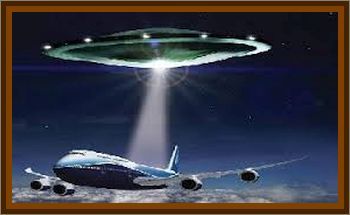 A Boeing 747, a wide bodied, long-range airliner with Swiss national registration, left Philadelphia International Airport at 4:50 p.m. and landed at Boston Logan International Airport 57 minutes later. The cockpit crew consisted of Capt. Phil Bobet, with 15,000 hours of flying time, First Officer, co-pilot, G, with 7,500 hours of flying time, and Flight Engineer K, whose total flying experience was not listed in the various reports. Capt. Bobet was sitting in the left pilots seat, and First Officer G was in the right seat. The Flight Engineers seat swivels so that he can face forward to share the pilots view, or sideways toward his instrument panel and aircraft system controls. Ordinarily, the Flight Engineer is facing forward during takeoff and landing, but turns sideways at other times during the flight. The flight proceeded along airways in accordance with its planned route. 16 minutes after takeoff it was over New Yorks Kennedy Airport, and turning to a northeasterly heading toward Boston. The Captain, who had been at the controls, transferred control of the airplane to the First Officer and keyed the microphone on the public address system to make a routine passenger announcement. The weather was clear, and the passengers sitting on the left-hand side of the airplane could see New York City and its environs. Capt. Bobet advised them of the sights beneath the airplane. As he was talking about New York City, he was looking at it through the left side cockpit window. With that portion of his announcement finished, he turned his head forward.

While Capt. Bobet was making his public address announcement, First Officer G was leaning forward, concentrating on adjusting the volume on his radio receiver panel. At the same time the Captains gaze turned to view the expanse ahead of the airliner, the copilot, now satisfied with his audio panel setting, moved to scan forward and outside. The time was 5:07 p.m. Thus it was then the two almost simultaneously saw the UFO.

Report to Traffic Control The following dialog is from the tape recording made by the FAA. Air traffic control communications are taped and archived. This permits later investigation of communications where violations of regulations are alleged, or where there is an accident or other unusual event.

SW: Yes sir. l don't know what it was, but it just over flew just like a couple of hundred feet above us. I don't know if it was a rocket or whatever. But incredibly fast. Opposite direction.

ATC: In the opposite direction?

SW: Yes sir, and the time was two-one-zero-seven. It was too fast to be an airplane.