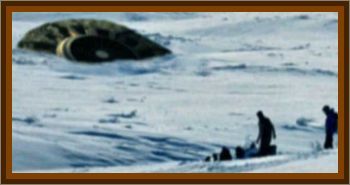 Something crashed into the 40' deep Lake Backsjön north of Arvika in Värmland, Sweden, according to a number of eyewitness accounts. Those who saw the unknown object called it something with small wings. Military officials would stick with the nothing at all explanation. 4 different people claim to have seen an oblong object plunge into the waters of Backsjon. The object was described as about 15' long and about 4'to 5' wide. There was a definite splash as the object smacked into the lake, throwing water into the air. One witnesses contacted the rescue station in Arvika; they turned the inquiry back to local police, who made their report. Police Chief of Staff Stellan Jansson told the media that all witnesses of the event were interviewed.

It would be the latter part of August that a full search of the lake began. Involved in the operation was the military, security police, and Arvika rescue personnel. Although witness statements were considered legitimate, the rescue teams soon discovered that a much more elaborate, and costly operation was needed. The lake was some 2 miles long, and ½ mile wide.

On the thirteenth day of September, Operation Sea Find began. The team this time was composed of 14 men, of which 8 were expert divers. Also employed was Swedens most high tech sonar equipment along with under water photography. A cover up scenario was the explanation given to local residents, claiming that the entire operation was a home defense exercise. Officials stated several different reasons for their operations, one was that robberies in governmental facilities had breached security, and missing items could have been dropped into the lake, and also that if the object was found to be foreign made, it could be some type of surveillance equipment related to the recent thefts in the area. Rescue operations ultimately claimed that nothing of significance was found, only a plastic bag and a metal barrel, dashing the hopes of locals who thought something exotic might be found. Jansson told the community that ten full days was given to the search, and though they were confident that something would be found, they came up empty. He also stated that because of the size of the lake, to fully search the lake would have taken a year or more. But, he was satisfied that if something unusual was in the lake, his team would have found it. A final report of rescue results was sent to government headquarters in Stockholm on October 1, 1999. Two pages of the report were not classified, but transcripts of security Police interviews and a description of the methods used in the search were classified. UFO-Sweden filed a request to declassify the secret documents, but as of this writing, their requests have gone unfulfilled. Although there are many unanswered questions about this case, there is no evidence to support a UFO crashed into Lake Backsjön.