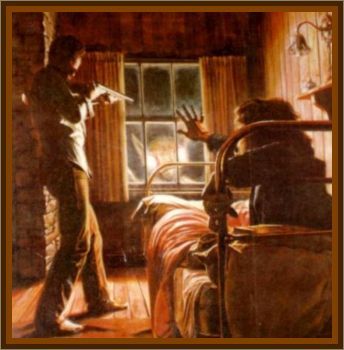 In rural Kentucky, near the towns of Kelly and Hopkinsville, a bizarre event was reported to local police. The location, a farmhouse, with no telephones. Billy Ray Taylor, of Pennsylvania, is visiting Lucky Sutton & his family. Billy Ray goes to get some water from the well. While outside, he sees a flying saucer apparently land nearby.

He runs back into the house, and tells his tale. The other people in the house don't believe him, and give him some ribbing for it. Shortly thereafter, the family dog begins to bark outside. Lucky & Billy Ray go outside to see whats got the dog riled up. They see a glowing light, which approaches them and resolves itself into a non human entity.

As described later, the creature is very roughly humanoid. The thing approaches with its arms raised, as if to surrender. The bizarre creature would be described as having large, bat like ears. It is bald, and about 3' to 4' tall, having two large eyes with a yellow glow, more on the sides than in the human face, a long thin mouth, thin short legs, and unusually long arms with large hands ending in claws.

As tradition imposes, they grabbed their guns and shot first, all questions postponed, at the moment that the creature was no farther than 20' to them. Billy Ray fired a shot with his .22, and Lucky unloaded with his shotgun. Both men later admitted that there was no way they missed the creature at close range, but the little being just did a back flip, stood up again, and fled into the woods.

No sooner had the two men reentered the house before the creature, or another like it, appeared at a window. They took a shot at him, leaving a blast hole through the screen. They ran back outside to see if the creature was dead, but found no trace of it. Standing at the front of the house, the men were terrified by a clawed hand reaching down from the roof in an attempt to touch them. Again, they shot, but the being simply floated to the ground, and scurried into the cover of the woods. The men sought the protection of the house again, only to find themselves under siege from these little men. For a time, the entities seemed to tease the family, appearing from one window to another. Taking pot shots through the windows and walls, their weapons seemed totally ineffective against the creatures.

Many times, the creatures would again approach the house, their hands raised above their head as in some kind of friendly gesture. The pair would fire at them, the bullet did metallic clanging noise when it hit the creature, which would flip over, or float in the air, or escape on all fours towards the weeds, only to come back again minutes later. The Suttons estimated that they might have been as many as 10 to 15 such creatures harassing them, although they never attempted to penetrate the house.

After 3 hours of fear turning into sheer panic, with the children crying or shrieking, the Sutton family decided to make a break from the house, and get help at the Police station at Hopkinsville. The farm was located nearer to Kelly, but the nearest police were in Hopkinsville. Family members took 2 vehicles to the Police Station in Hopkinsville, and reported their strange tale to Sheriff Russell Greenwell. Finally persuading the policemen that they were not joking, the policemen agreed to visit the Sutton house. Arriving at the farm, police found no trace of the creatures, but did find numerous bullet and rifle holes in the windows and walls. Greenwell was in charge of the 20 plus officers at the scene, and reported that the Suttons seemed sober, and were genuinely frightened by something. After a canvas of the neighborhood, reports were entered of the hearing of shots being fired, and the observation of lights in the sky.

Exhausting all efforts to find a rational explanation to the strange story, and finding no clear evidence of any alien visitors, the police left the Suttons farm at about 2:15 a.m. 90 minutes later, the creatures made their return. They began again peeking in the windows, seemingly out of curiosity. More gunfire took place, but again without effect. Several more hours of antics followed, finally stopping some 90 minutes before daybreak.