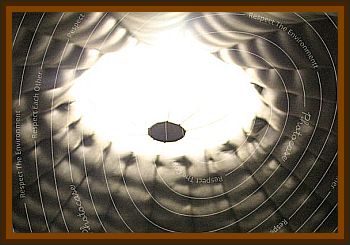 In September of 1975 a member of the Meteor Research Society in New York City sent me a Photostat of a letter he had received from Surrey, BC which adjoins Delta where I live.

The letter was lengthy, detailed and carried sketches of a UFO observed in Surrey. For a variety of reasons that will become apparent, I, along with Brian Fewster, visited the writer and completed a 45 minute tape that described the sighting.

On October 31, 1974 John Waidner and his wife Rosa left their home in Surrey, BC. The time was 6:50 p.m. and the evening was damp and misty. It had rained most of the day, but was fine as they drove north along the highway to New Westminster where they intended to play Bingo.

After 5 minutes driving, Rosa, who was in the front passenger seat of their station wagon, noticed a very large bright light approaching them from the west. Traveling slowly, it appeared to be about 200' above the trees, a big light, a giant star, a bluish sparkling light, said Rosa who was in a better position to observe it than her husband who was driving.

John, do you see it?

Do you know what that is?

Slowing down to about 25 mph John carefully studied the craft that was approaching from his left. A large halo of light, it dazzled the eyes and made viewing of further detail impossible. The light was well below cloud level and had the intensity of a blow torch, also being similar in color.

Nothing on this Earth has a light like that. Rosa added.

The object also seemed to slow down and they had the feeling of being observed. Still traveling slowly, they detected no apparent malfunctioning of their car. Then, whoosh from a gliding motion the object made a 90° turn and zoomed off, still at the same level. Whoosh, another 90° turn. Several times it zigzagged east and west but never crossed the road in front of them. During this display the object was below the trees on their left as they continued to drive down the highway, still maintaining the new steady 20 mph.

By now, however, a change had taken place in the light’s color. It appeared as a reddish orange ball that reflected off the clouds and conveyed the impression of a burning house. Having traveled about a mile the Waidners had reached a wide intersection in the highway, just as the object returned. Across the street from them a small group of children were busily engaged in burning sparklers. It was of course Halloween night and, happily engaged, they seemed totally oblivious of the large object that had now come to a halt almost overhead. Mrs. Waidner felt the occupants of the object were curious about the children’s activities.

Remaining stationary for a few seconds, both John and Rosa made the most of the time to study the craft. It was less than 300' away and about 200' to 300' up, and they could see through the red halo as the bright light had been swung away from them. Like a large hamburger bun, the color of dirty brass it had a base of about 25', then an outer flange. The diameter of the body of the craft, they feel, was 30'. A belt of square shaped windows circled the object, 2' square they appeared to have raised edges. From these windows came the reddish orange light that now radiated from around the craft in a sort of fog. From the base of the craft another belt of smaller lights twinkled in sequence, blue/green & yellow. The belt of windows at the top had at this point no lights shining from it. Rosa estimated the object was the height of 2 tall men.

At this point they had pulled over to the shoulder of the road and stopped the car although the motor was still running. It was here that John, who up to then admitted to being a hardened skeptic, verbally conceded:

That is something out of this world.

A statement that provided his wife with much visible satisfaction.

Slowly moving away again, the Waidners drove down the highway parallel to the UFO on their left. A mile further on it headed southeast and left them behind. The total sighting time was about 9 minutes.

In November Mrs. Waidner wrote to the Vancouver Sun and her letter was printed. A witness in Burnaby replied claiming that he saw a similar object the same night.

This case has some additional noteworthy aspects that should be examined.

1. This sighting took place only 14 days after David Knutsen of nearby Whalley photographed a flying circular object.

2. It occurred less than 2 air miles from where David took his picture.

3. The object described in this report was seen less than 5 air miles from the Port Coquitlam sandpit landing that took place in August of the same year.

4. A common denominator, be it coincidence?, is that young children were present in all 3 cases.

5. The region in which this sighting of the Waidners took place was in the immediate vicinity of an extensive cross country power grid system. The object was close to, and apparently at times traveling over or alongside the pyramid towers which all center on a large sub station, 1 mile west of where the Waidners observed this craft.

6. I have become increasingly aware of much activity that apparently centers on a strip that borders Surrey and North Delta. This zone is about 15 miles long, runs north to south, as far as the U.S. border, and is 2 miles wide. The grid system runs up the center, centralizes at the transformer station, then branches into an east-west direction.

7. In November, 1975, I placed an advertisement in a small local paper seeking witnesses to the David Knutsen sighting. Although I received no direct confirmation of what I was seeking, 16 phone calls within 4 days described lights and objects seen by observers, many that took place in the specific area of intense activity.

8. In May, 1975, a 17 year old boy told me he had watched a silvery colored highly reflective object, at four o’clock one sunny afternoon, for a period of 5 minutes. It remained stationary, then took off at high speed. This observation took place on the eastern perimeter of this strip and less than ½ air mile from David Knutsen’s home.

9. Mrs. Waidner sent her detailed letter and sketches to New York on August 8 this year. On August 19 the National Enquirer published a double paged story of a film in making that reenacts the Betty and Barney Hill abduction. The Enquirer photo has a mock up of the craft the Hills described. To Mrs. Waidner’s astonishment she noted that the object she and her husband witnessed was almost identical, the only discrepancy being that the flange on the Hill’s craft was larger than the one they observed. The Enquirer picture displayed a landing platform that was possibly retractable and certainly was not visible to the Waidners.

10. Another and final unusual point of the Waidner sighting was that during the whole time they watched the UFO they were not aware of another car driving past in either direction. John recalled seeing car lights in the distance. This is a very busy highway at any time of day or night as it links up with the U.S. border. Yet at 7:00 p.m. they never saw another car for a period of 10 minutes over a distance of 2 miles. I personally find this hard to believe and wonder if this scene was staged just for them, as if a memory lapse was again induced.

Mrs. Rosa Waidner is a nurse by profession. She is eloquent and has an impressive eye for detail. Even one year after the event, when relating the circumstances, the excitement of that evening came through very forcefully as she recounted the details on tape.