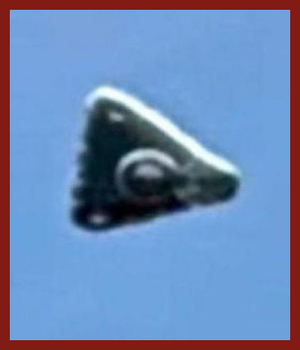 While driving toward her home on McKinley Avenue, Mrs. Bruce A. Holmes, of Sunnyvale, saw a strange looking object about a city block’s distance from her.

The UFO hovered motionless over neighborhood homes at an altitude estimated to be no more than 150' and appeared to be about as large as an 18' x 24' living room.

The main body of the object was similar to a blimp, somewhat cigar shaped, but fatter, possibly the shape of a disk thickened at the center. It was dark and barely visible against the darkened sky.

Below this body a slightly rectangular, flat, box like area was brightly illuminated. The light was shining downward and appeared to come from within this box like section.

Around the entire bottom edge were what appeared to Mrs. Holmes to be fluttering flags.

These were white, and either lighted or reflecting the light from within the boxed area.

Although the object itself was quite motionless, the appendages were in constant motion, reminding Mrs. Holmes of the flags used at service stations to attract the attention of customers.

Mrs. Holmes continued toward her home, parked her car and ran into the house to summon her husband. As they hurried outdoors, the object had already begun to move off and upward at about a 40° angle, and it was some distance away, heading southeast toward San Jose.

Mr. & Mrs. Holmes watched it grow smaller as it moved toward the horizon, between 2 large trees.

Its speed was about that of a propeller aircraft.

Then the object shot quickly to the left behind one of the trees at extremely high speed, then back again across the same path to the right, behind the other tree.

It then moved back into view between the trees and was joined by 2 identical objects. The 3 UFOs continued in the direction of San Jose and disappeared over the horizon.

The total length of observation was about 10 minutes. The weather at the time of sighting was clear, with a 10 mph to 15 mph wind from the North.