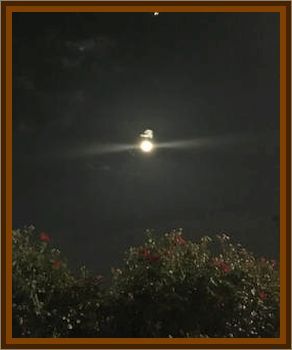 This incident occurred in a neighborhood called Forest View, 17 miles West of the city of Houston.

Forest View lays directly South of Baker's Reservoir and within that reservior was a military air base. They trained paratroopers and practiced flying helos out there all the time.

The neighborhood was used to seeing this training within the confines of the reservior, but occassionally, a helicopter or two would circle over the neighborhood at a pretty low level. No one was bothered.

And I remember the whole neighborhood just being used to the military presence. Also, the neighborhood, in particularly my house, laid in the flight path of a small airport in Sugarland, miles to the South.

The small aircraft would usually fly South over the neighborhood, over my house to land down there in the small little airport. So, this is the setting of which my encounter took place.

I don't remember the year because I was only 9 or 10 at the time, and I wasn't really too interested in UFOs either. I do remember the exact time, though, because of what I was doing. I was watching the local NBC affliate and I remember that some boring sitcom had just gone off. The ending credits were now on the screen and the exciting Prime Time shows were next. I looked at the clock. 6:58 p.m.

Just a few more minutes and something good would come on. Bored, I tuned out and listened the noises within the house. I was in the bedroom watching TV, while my parents were in the livingroom watching something different. I could hear a loud and annoying commercial playing on theirs. I also heard something else, something I was used to but I would always notice it. It was the low steady sound of an approaching plane.

Not wanting to watch the stupid commercials on TV, I got up and went to look out the window. It was dark outside, as I looked North through my backyard, and cloudy too, low clouds.

As I listened, the noise got louder and louder. still, until I realized that this sounding bigger than what I was used to hearing.

I looked up in the direction of the approaching plane,and waited for it to appear over my house. I didn't think I would actually see it in the darkness and through the clouds, but at least I thought I'd be able to see the lights. Eventually, as the steady hum built into a rolling, thundering roar, the aircraft suddenly appeared and what I saw scared the living hell out of me.

Upon seeing it, I instinctively hit the ground and braced myself. To me, at that moment, I thought I was about to see a plane crash into my neighborhood. In that flash of a terrifying instant, I saw a solid metalic underbelly of a large aircraft appear through the trees, and it was so low it appeared to be flying at tree top level.

What didn't make sense, but I didn't have time to think about as I ducked for cover, was that this thing was huge. The curved underside of it was at least three houses wide. Nothing that big ever flew over the neighborhood, not at that level anyways. And, it had absolutely no lights. None. The only reason I was able to see it, was that the streetlights behind my house reflected off the bottom of the craft. That's how low it was.

Well, I waited. Curled up in a frieghtened little ball, and listened as the sound gradually died away. I braced myself for an explosion, as I imagined that the plane would surely crash.

It didn't. After it finally died away. I stood up and contemplated everything I just experienced. Thinking back on what it looked like, it wasn't until after the experience that I realized I had seen a UFO.

I ran into the livingroom, all excited: Mom! Dad! Did you hear it? Did you see it?

They just looked at me, puzzled. I couldn't believe it. They hadn't heard it. But, to me, it sounded so incredibly loud. I was frustrated. How could they not have heard something as loud as that. They knew that I was not prone to overreacting or letting my imagination run that wild. They listened to my experience with interest, but they said they truthfully didn't notice anything. Discouraged and confused, I stayed up the rest of the night, even watched the evening news. I watched the entire broadcast, waiting to see if they mentioned anything about a UFO or at least a plane making an emergency landing down in Sugarland.

Nothing, but I did take note of something I thought might lead to a possible answer. If it didn't come from that air base, which I still believe it did, then I thought it might have something to do with the jet stream, which was exactly over the city of Houston at the time.