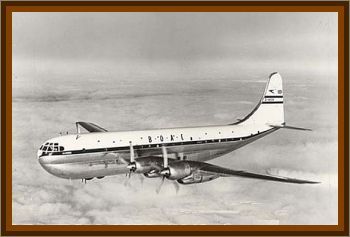 Flight 510-196 took off from New York at 3:03 p.m. EST. About three hours (6:03 p.m. EST) later after a detour to route via Cape Cod the flight was over the St. Lawrence Estuary near Seven Islands, Quebec at 19,000' when the captain noticed some strange objects. Captain Howard stated that the objects were moving at the same speed as the flight, which was around 230 Knots (265 mph). The objects appeared to be on a near parallel course to the aircraft, maybe 3-4 miles ahead of them on the northwest direction.

Howard stated that the objects were below the cloud cover at this time, he guesses at 8,000'. When the aircraft crossed the coast of Labrador the clouds ended and the UFOs became fully visible. Howard also stated that the UFOs appeared to have ascended nearly to their altitude of 19,000'. The weather at TOS was clear with unlimited visibility. The objects remained with the plane for more than enough time for the crew and several passengers to draw sketches and observe the apparent UFO fleet, which was with the Boeing for twenty minutes in all.

A statement of the apparent size, shape, and number of unknown objects:

There was one large object and six smaller globular things. The small ones were strung out in a line, sometimes 3 ahead and 3 behind the large one, sometimes 2 ahead and 4 behind, and so on, but always at the same level. The large object was continually, slowly, changing shape, in the way that a swarm of bees might alter its appearance. They appeared to be opaque and hard edged, gray in color, no lights or flames visible.