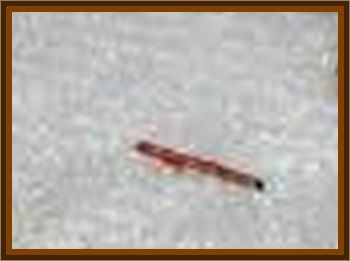 John Doe reported that he was visiting Houston to look for a home. At the time he was a police officer in Chicago, and was planning to retire in a few years to a new location. He said that his realtor put him up in a house close to the realtor's home.

In the middle of the night John was awakened by a sound very similar to the sound heard in the movie Close Encounters of the Third Kind. He was quite surprised by this.

At the time the realtor's two dogs began barking wildly. Suddenly the dogs stopped barking and the witness went back to sleep. The next morning he felt a sore spot on his left calf muscle. He looked down and found a sore. He pulled out some brownish metallic material from his calf. He had no idea how the material got there. He looked at it through a magnifying glass and wasn't able to figure what it was or how it got into his leg. He said that the spot on his calf is still there after nearly 15 years. He also stated that the spot sometimes itches.

This is a unusual case in that John claims to have heard a sound like the sound in a movie. He has credibility given that he was a police officer for 30 years. He did not see anything, but he thought that the dogs were reacting to something. The material that he pulled out his leg the next morning is somewhat similar to the implants described by alleged alien abductees. It is difficult to say what happened on this night. Like most close enounters and abductions physical evidence is lacking. John Doe didn't keep the metal that he extracted from his leg.