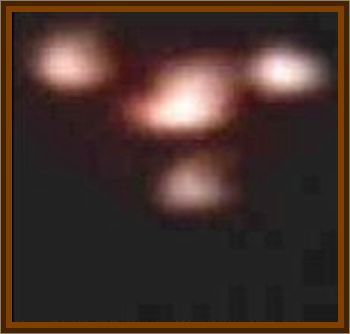 St. Petersburg Incident is one of the most witnessed and highly recorded incidents in the history of UFOlogy. The events took place in the skies over St. Petersburg in Russia, when at around 7:00 p.m. the residents of the city became aware of a cluster of lights hovering overhead. The incident was unusual in that there were multiple witnesses, a number of video recordings made and was seen quite clearly by air traffic staff & aircrew at the local airport. Just after 7:00 p.m. the air traffic controllers at the local airport saw the strange objects appear on their radar screens and also strange lights became quite visible in the skies over the airport. One of the air traffic controllers, Victor Laxtushin, went outside and witnessed the objects, he remarked:

I sketched the event as it happened, the shape of the lights changed, left and then re-appeared. Others were watching through binoculars. There was an aircraft on the runway, they confirmed the presence of a UFO. I am perhaps better qualified than most, but I can't say what it was. experimental craft? But why fly experimental aircraft over St. Petersburg? By 7:15 p.m. the strange lights had now apparently formed into a triangle and reports of the UFO were coming in from many different locations and many people captured the incident on video tape. He remains perplexed by the whole event.

Uri Arzamastsev, an economics student, noticed the lights, high in the sky and well above the horizon, through the kitchen window, rushing outside with his camcorder he captured the UFO on video and, by this time, the rest of his family were also witnessing the event.

It was later officially investigated by Naval Captain Pavel Syrchenko, who after collating all the evidence was unable to explain the event away as military or civilian aircraft, balloons et cetera.

The objects hovered over the city for about 20 minutes and at 7:20 p.m. they could not be seen. There are many similarities between St. Petersburg Incident and the series of events which became known as The Phoenix Lights. In both cases the appearance of a triangular-shaped craft was heralded by strange lights in the sky.