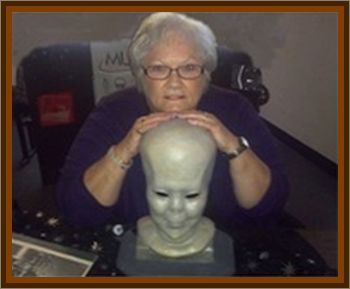 Denise Stoner was just 2½ years old the first time she remembers the alien taking her.

She was at home in Hartford with her grandfather. Her mother was at the hospital giving birth to her younger sister. She remembers staring out a large picture window and seeing an egg shaped object in the sky, hovering over some power lines.

What’s Humpty Dumpty doing up in the sky? she asked.

She remembers the fear in her grandfather’s face when he suggested it was time for bed.

Later that night, as she lay staring at her nursery rhyme themed wallpaper, an entity walked through her wall.

He looked like a monk, he had a robe, and he was carrying a light. I wasn’t afraid of him, said Denise.

He put out his other hand for me to take it, and I did. We walked out into the hallway.

The alien pointed his light at the wall, and they disappeared through it, she remembers being in a large, dome shaped room with a lot of other children, and they seemed to be learning something.

In the morning, she was back in her bed.

Since then, she says, she has been taken more than 50 times, from her home, from the street, from her car, the last time just 3 years ago, driving through the mountains in Colorado. Each time, it’s the same being responsible.

He looks like your typical gray, but he’s one of the tall ones. It’s just the very subtle shape of his face, his chin is a little wider, she explained.

She calls him her escort.

There’s no friendship, He comes to get me, and I know I’m going to be safe.

He’s also going to oversee whatever is done.

Stoner, 68, lives in Florida with her husband. Now retired, she works with fellow experiencers, people who feel they have had contact with intelligent nonhuman entities.

She also conducts investigations on behalf of the Mutual UFO Network, or MUFON. Being an experiencer is very much part of her identity. Her story is coherent, she doesn’t ramble or get lost in the telling.