Disappearance Of The Stonehenge Hippies 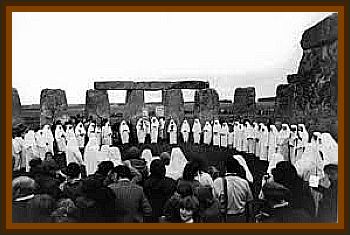 In the early morning of a day in August 1971, a small group of young adults set up camp in the center of the Stonehenge structure. A freak weather storm that had blown in over Salisbury Plain struck at approximately 2:00 a.m. Lightning struck nearby trees and even the stone monoliths themselves, which were reported by several witnesses to have glowed a bright blue, which caused them to avert their eyes as they heard screaming.

Later investigation into the reported screaming revealed no remains of the group, and only their smoldering camp equipment remained.

Their purpose was two-fold:

To party like there was no tomorrow, but also to consume the spiritual vibrations which allegedly surrounded this architectural marvel.

Anyway, around 8:00 p.m., or so the story goes, the travellers pitched a number of tents and got the party underway.

The group was identified to be:

The transcript of the journal entries that relate to the trip is as follows:

A couple buddies and I took a trip yesterday, and we just talked about the usual, our girls, families, shit like that. Over a smoke we got to talkin' about how we should totally camp in that big rock place in England. I wasn't really up to the idea, but after a few more smokes and a couple of drinks, I caved in. We'd invite our girls, maybe a few friends, and take a trip up to the place.

He left a couple hours later and I turned it over in my mind. Seemed like a pretty good idea at the time, but I wasn't too sure if those dicks of law enforcement would let us. To hell if Lucas didn't make us try.

Talked to Shary 'bout the trip we might take. She was really into it. She said she always wanted to go cross the pond, or whatever she said. After lunch she askd me to take her over to Julia's place so they could talk about it, my guess is over there Jeannie or whichever show has that girl with the magic nose. After I took her there, I drove to Wilma's place. She wasn't too happy about the idea. She said that she had dreams about a circle of rocks and God's hand striking, or somethin' like that. I usually trust Wilma's dreams, and so does everyone else, but lately she's been hittin' the bottle after her old man died last month. It could've been one of her hangover dreams. Maybe if she dreams somethin' else about it.

Finally! After doin' work for a month at Mr. Jacobson's farm, we have money to buy stuff and gear, on out to Stonehenge. Everybody's packin' up for tomorrow morning, but Wilma's still shakey. Around a week ago she said that she had another dream, we were at Stonehenge, camping, and it got so bright that nobody couldn't see nothin', and that we ended up somewhere cold. Can't say that I'm not a little scared. But even for Wilma's dreams that sounds a bit outta there. Better get back to packing myself.

Okay, we're here. Lucas is setting up the tent. It's after dark, but the sun's still lightin' the sky up something pretty. Makes me think of Wilma. Shary and the others are there, but we could do it outside. Radio said that there was a small chance of rain, but I don't believe it. The radio always talks shit about the weather. It wouldn't be any less right if we tried to read the weather in pot smoke. Luckily Lucas brought a couple extra stashes. I love that dude, even if he sometimes is a goddamn knucklehead. Julia's calling to get me to help. Might as well, its getting boring just writing, and my hand's crampin' up.

The journal entries end here. The transcripts of the three letters are as follows:

The guys brought pot. Can ya' believe that? I thought we'd just take a trip down to this place and have a nice camping trip. But no, they had to bring that stinky ass grass shit here. Men just don't know the first thing about manners.

Danniel and I are smokin' it up. It's times like this when us 5 are together, away from our families and the city that smokin' relaxes you the most, and makes you think. Maybe I'll quit my job at the autoshop when we get back. Julia is fuming smoke outta her ears that we brough the stuff, but I don't mind. Almost every time she comes around and takes a drag. Makes her loose, ya know what I mean. Wilma's huddles by the front of the tent, getting nervouser by the minute, she keeps swearing that somethin' bad's gonna happen, that we're gonna die or some other dark shit. I wouldn't believe her lately, but she ain't been drinkin' for a couple of weeks. If she don't brighten up soon, I swear I'll push her out myself.

Its raining. I knew there'd be rain. There's always rain when the blue glow comes. The blue glow comes for me every night, but only when I'm not drunk. They took me straight into the sky, like nothing. He told me about them before that, that they don't come after ya if your too drunk to see your own hands.

This past few weeks, I haven't been drinkin', and I've been havin' my future dreams again. But they haven't come for me yet, not since the others started takin' about coming to Stonehenge. Shary's scared of the lightning. Always has been, but that's not what she should be scared about. I think the lightning is close, it hit a tree, and the rocks too. I think the rocks are theirs, the things' rocks. Their glowin' brighter than the lightning. If someone finds this, fear this god foresaken place down and... (The rest is illegible, presumably due to the blinding light.)

By 1:50 a.m. the revelry was still showing no ends of drawing to a close, but 10 minutes later there was a sudden flash of lightning and the heavens opened. A storm manifested itself without any warning, and the hippies decided to carry on their festivities within their raggedy tents.

As they ran for cover, more lightning bolts arced down. Some struck trees in the vicinity, others allegedly hit the huge stones themselves. It was at this point when things seem to have taken a very mysterious turn.

It seems a local policeman was on patrol in the area, and at some point he happened to glance over at Stonehenge and, to his amazement, observed that the stones were bathed in an eerie blue light.

A farmer who was outdoors at that time, no one has ever explained why, is said to have supported the officer’s account. As both witnesses looked on, the light became so intense they had to avert their eyes.

As they did so, a cacophony of bloodcurdling screams came from the vicinity of the tents in the middle of the circle. Both the policeman and the farmer ran towards Stonehenge to see if they could help.

When they arrived at the scene, they were under the impression that the partying hippies must have been struck by lightning themselves.

However, they were amazed to discover that nothing remained except a few shattered tent pegs and the extinguished remains of their campfire.

After the discovery of these transcripts, it is assumed by conspirators that Wilma Rupert was a psychic, and that she had frequently been visited and abducted by aliens, like her father. The storm, although predicted, was more destructive and chaotic than was originally expected, presumably due to the UFOs approach. It has also been theorized that the Stonehenge structure is used for the supposed aliens to land and/or locate potential abductees.

As of yet, further investigations into the disappearance of the group of five have been postponed indefinately by higher up European and American authority. Future research into the event is under pending, but will most likely not be allowed. Due to this incident, any and all overnight camping in and around the Stonehenge structure is illegal and can be penalized.

The tents, and their human occupants, were nowhere to be seen. They were never seen again.

Back in 1971 Stonehenge was freely accessible, so there is no difficulty in thinking that a party of hippy travellers may have set up camp there. There’s also no problem in assuming that a police officer in a panda car may have been driving along the road only a few hundred yards away.

One of the odd things about this case is that some accounts contain a number of specific details not normally found in hoaxed events or stories. For example, the names of the missing people.