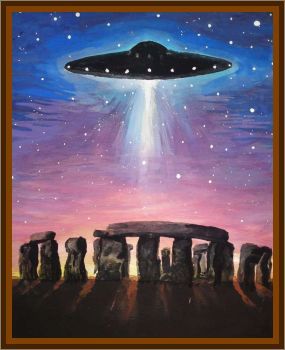 Since the disbanding of the UK’s Ministry of Defence’s UFO hotline in 2009, thousands of pages of information have been disclosed to the public. Amongst them are reports of UFOs being reported near historic landmarks, including many from Stonehenge.

One example is a photograph submitted in January 2009. The image appears to show a small speck of light hovering over the standing stones. According to the archived email, the witness did not notice anything peculiar in the sky at the time of taking the picture. This UFO has been captured hovering above Stonehenge, it is black in color and disk shaped. It was estimated to be 20' to 30' across.

On top of this, it is reckoned that 85% to 90% of all reported crop circles appear in England, in a concentrated area around the standing stones of Stonehenge. Crop circles are reported to appear suddenly overnight, often materialising in conjunction with sightings of balls of light. Many theorise that they are extraterrestrial, and that the ancient monument of Stonehenge holds a special significance to visiting aliens.

Nigel Watson, British investigator of UFOs, and author of the UFO Investigations Manual, has reviewed the image and claimed Stonehenge has often been a magnet for unexplained activity.

This is due to its location on a number of so called ley lines, hypothetical alignments of a number of places of geographical, historical and paranormal interest, such as ancient monuments.

Several years ago, a disk shaped craft was seen by a family driving down a nearby country lane. When they stopped their car to get a better look at it, a bright beam of light cast down from the hovering object, illuminating the trees beneath it. As they got more fearful of this apparition, the UFO rose higher in the sky and then shot away at high speed.

Nigel also claimed a woman who lay in the center of a crop circle that she said appeared near Stonehenge in 1996 had later received psychic messages from extraterrestrials.

He remains to be convinced by the January 2009 picture, adding:

The object in the picture is frustratingly at a distance so could be a slightly out of focus bird or aircraft.

The ancient site of Stonehenge in Wiltshire has long been a focus of paranormal phenomena, and I have read some intriguing cases concerning this famous spot on the bleak Salisbury Plain.

In March 2011, 9000 secret UFO documents were released by the British government, which confirmed that Stonehenge has a long history of UFO sightings behind it.

As far back as 1670 there were reports that somebody had seen a strange ghost, near the stones. When the witness asked if it was there for good or evil, it declined to comment. The story goes that it disappeared, leaving behind an unusual smell, strange aroma’s are often to be found in UFO related incidents.

In July 1877 locals reported seeing strange lights in the sky over the stones.

There is a case from August 1957, when the military were enacting war strategies on Salisbury Plain.

As they were getting ready, a crew in one of the tanks reported seeing a large, silver cigar shaped object, which the tank opened fire on.

A few years later, in 1968, Arthur Shuttlewood, a local journalist and prominent figure in the Warminster Thing phenomenon, said he saw a UFO close to a ring of fire that emerged from the stones.

In an incident from June 21, 1987, about a dozen police officers were on Summer Solstice duty at the site. For many years now there has been a heavy police presence at Stonehenge during the Solstice, and this was no exception. Officer Phil Hutchings described how they had seen a strange object circling the skies throughout the night, in a methodical zig zagging motion, as though it was mapping the area.

On November 18, 1990 a young couple had been visiting relatives, and were driving home at about 8:30 that night. They decided to stop At one time it was possible to walk freely amongst the stones. The couple noticed an eerie orange light coming from a clump of trees nearby. The light emerged and began to track their car as they approached the stones. As they neared the stones the car headlights illuminated a band of fog, and when they got out of the car, all was still. They then noticed a tall figure standing next to one of the stones. It sounds like something out of The Day The Earth Stood Still, being about 7' tall, and dark and featureless.

This disturbing vision came plodding purposefully towards them. Understandably, the couple ran back to their car. The figure kept on coming though, and reached the car just as the couple drove off.

On April 19, 1993 Air Traffic Control at Prestwick reported seeing a UFO, flying four times faster than Concorde. The object was also picked up by Gatwick Airport, as it rapidly sped south over the country. Meanwile Captain Fodoala Parc of Egyptian Royal Army Intelligence was busy conducting manouveres on Salisbury Plain, he was instructed to go to Black Heath, about 3 miles away. Upon arrival there they found a four legged oval object, 60' x 40', which seemed to have been damaged on landing. They were instructed to secure the area. The Captain noticed two figures standing on the top steps of the object. They were about 3½' to 4' tall, and had slanting eyes and thin arms. They made no attempt to communicate. Within 50 minutes a U.S.A.F. Sikorsky helicopter arrived and airlifted the object away.