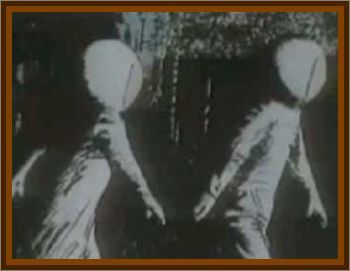 Wojciech Godziszewski and two passengers were traveling by car in the area of the Polish German border when they noticed on the horizon a strange looking orange ball of light that emitted a very strong light.

Wojciech stopped the car to watch the phenomena. After about 4 minutes a smaller yellow ball of light emerged from the orange sphere. It moved slowly toward the ground at a 45° angle. After about 2 minutes another identical ball of yellow light emerged and executed the same maneuver as the previous one.

Soon they noticed another orange ball of light hovering near the village of Dobieszyce and Swidwie Lake.

Wojciech then headed towards the village through a forest road when suddenly they noticed a strange creature standing about 150' from the car. They described the creature as about 4' to 5' in height, with large pointed ears, and covered with long gray hair.

Seeing the car, the creature turned around and started to run away. The witness accelerated his vehicle in order to catch up, but incredibly he could not keep up with the creature, which moved very quickly. The speeds of the car reach a speed of 70 M.P.H. and they still could not approach the creature. The creature suddenly turned into the forest and disappeared among the trees.

Godziszewski began to chase the creature on foot, but he was suddenly overcome by a feeling of dread and fear.

After 2 minutes he returned to the car and drove back to Stolec on his way there he saw another orange ball of light hovering over the village of Buk, other residents there also saw the hovering light.