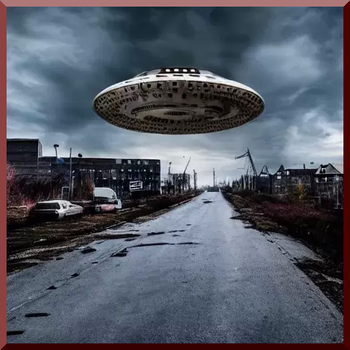 I as working in a multi story office block in St Mary Cray. Looking out of the window on the 4th or 5th floor, I saw a stationary light in the sky above the houses in the Petts Wood direction.

It looked like a metallic oval disk but quite.

I as working in a multistory office block in St. Mary Cray, Kent, England. Looking out of the window on the 4th or 5th floor, I saw a stationary light in the sky above the houses in the Petts Wood direction.

It looked like a metallic oval disk but quite small. Size was relative as I had nothing to compare it with. It could have been small nearby or large far off. I pointed it out to a colleague. He saw it only as a light, no shape and no sense of material. After some 2 or 3 minutes another colleague came into the room. I called him over to have a look. The moment I did so, I turned back to the object and saw it vanish. Out of the corner of my eye I saw it streak into the sky almost vertically like a line of white dots. The switch from stationary to movement appeared instantaneous. The newly arrived colleague saw nothing.

I worked in two UK government departments and in a learned and professional society as an administrator. At the time of the incident I was specialising in abstracting and indexing technical report literature in the aerospace field. I knew a fair bit about aircraft at the time. I have a B.Sc. degree in physics and M.Sc. in Information Science.

I do not assume that they are alien spacecraft although it is a possibility. They could be an unknown natural phenomenon produced by stresses in the earth or they could be a form of being that lives offworld or a projected form from a different space time system. In my case, the person who saw the object with me was open minded and a good friend. The one that arrived later was a skeptic and I did wonder if we were being watched. I have no logical reason to believe this. In fact it is quite illogical given how far away we must have been, at least half a mile to 2 miles. It happened almost as if my pointing it out to the second witness prompted its departure. Since that time I have had an increasing number of insights into space time and the nature of reality. I cannot say they are connected to the incident but I cannot discount the idea entirely. These are not likely to be accepted by science so I do not wish to say more.

If what I have seen is true then our view of reality is way off the beam. I think most people would regard me as eccentric to say the least so I do not make a fuss about it.